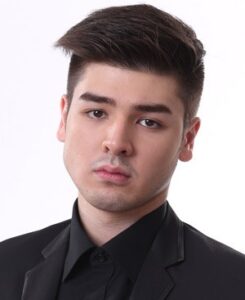 Andre Paras is a possible gold-mine for GMA7, a network which lacks enough good leading man material. Andre certainly fills the bill as he is young at 19 and has matinee idol mestizo good looks. He also has the advantage of not being vertically challenged as he stands a towering 6’3”.

He started well in his first movie, Viva’s “Diary ng Panget”, as support to James Reid, and his first foray into TV soaps is also a big success, “The Half Sisters,”  which has been the number one afternoon drama series for over a year now. But Andre should be careful with his next moves to make sure his winning streak continues.

It was a mistake for him to be a support to Bret Jackson in the dismal flop that was “Your Place or Mine” and we think it’s also another misstep to launch him in a movie opposite Yassi Pressman. At this point, if Andre would make a movie, his best bet would be to be paired with Barbie Forteza as their loveteam in “Half Sisters” already has its own following. Viva should have just borrowed Barbie from GMA Artist Center and paired the two of them in a movie that could have been a co-production with GMA Films. In all honesty, a movie with Yassi doesn’t seem to have a spark at all.

At the thanksgiving presscon of “Half Sisters”, Andre was asked if it’s possible for him to fall for Barbie even off cam. “We don’t know,” he says. “Maybe in the future. We never know, di ba? I mean, there’s nothing wrong with that. As of now, after one year of working together in ‘Half Sisters’, Barbie and I have become really quite close. She was very helpful to me kasi when I started, I’m not that good with my Pilipino at lagi akong nabubulol, so I often ask her before a take, ‘Barbie, okay ba ‘yung pagde-deliver ko sa line ko?’ Kung hindi okay, then she says, ‘You can change it para mas comfortable ka.’ She has given me a lot of good advice kasi siya rin ‘yung mas experienced sa acting between the two of us. I’d really like to take serious acting workshops to help hone me but as of now, walang time sa dami ng ginagawa ko, e.”

In real life, he has yet to have a girlfriend, but in ‘Half Sisters’, he is torn between Barbie and Winwyn Marquez. “Puwede ko naman silang pagsabayin. I know what to do. Joke, joke, joke!” he says.

So isn’t he looking for love? “At this point, hindi pa ako handa. Kung may karelasyon man ako sa ngayon, it’s my career. Pinasok ko ito, so I want to make good in it. I want to focus on it muna and I don’t wanna be distracted. But if ever maghahanap ako ng karelasyon, it will have to be someone who will help make me grow as a person, ‘yung positive ang magiging influence sa akin.” (MNS)