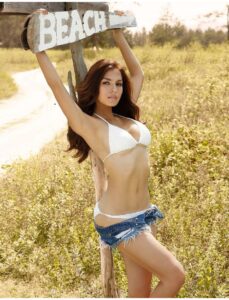 Andrea Torres said she doesn’t mind if she just ended up as number 2 in the FHM Sexiest Woman search.

“I just want to thank all my fans and all those who voted for me for their support,” she adds. “And I’m glad that ang nag-number one, si Jennylyn Mercado, is a Kapuso actress pa rin. I also want to thank pati ang Marian Rivera fans na ibinigay ang boto nila sa akin dahil buntis nga ang idol nila. Okay na ‘yung pumangalawa lang ako.”

Andrea is busy now with her new project,”Blood in Dispute”, which is a co-production between GMA7 and a Cambodian company.

“I really had a good time shooting it on location in Phnom Phen, Cambodia, with Mikael Daez as my leading man. We got to work with some Cambodian actors na puro mababait and our director, who is Canadian. We also shot some scenes in Manila. I play Mikael’s love interest who follows him to Cambodia nang lumaban siya roon in a martial arts competition without knowing na ang opponent niya is his half brother, played by a Cambodian actor.”

“Blood in Dispute” will be shown in Manila as a mini-series, but in Cambodia, it will be re-edited and shown first as a full length movie, then it will be reshown again on TV as a teleserye. (MNS)