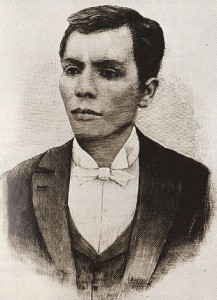 Andres Bonifacio, matapang na tao, Lumaban sa gâ€™yera, naputol ang tenga
In the smallÂ  plaza beside the ancient parish church dedicated to St. John the Baptist in my river bound hometown of Calumpit stands a monument to Andres Bonifacio, where we, as school children, clad in patadyong and camisa de chino, would sing â€œBayan Koâ€ and other patriotic songs on November 30, to celebrate the heroâ€™s birthday.Â  On this day too, the mayor of our town would honors its illustrious sons and daughters and ask them to deliver a speech to stir in the audience what little embers of pride for identity and consciousness still smoldered in their breasts, taking inspiration from this man who, as the juvenile rhyme from our irreverent childhood said,Â  bravely marched to war and lost his ear.
The icon that is now crowded out by the new Water District Building depicted Bonifacio brandishing his bolo on one hand and a flag in the other, wearing an unbuttoned shirt and kutod pants, rolled in the typical fashion of a magbubukid. TheÂ  stone statueÂ  made me remember another silly ditty we chanted when we were tykes playing tumbang preso under the wide shade of the acacia in front of the visita (chapel):
Konteng bato,konteng semento, monumento.
According to historian Ambeth Ocampo in his book Bonifacioâ€™s Bolo, this same plebian image of the hero can be seen in different escayola or cement versions in numerous schoolyards and municipal plazas all over the country, including the Manila City Hall mural byÂ  1973 National Artist of the Philippines for Visual Arts, theÂ  Angono genius, Carlos â€œBotongâ€ Francisco. Ocampo observed that â€œeverything seemingly comes from the same mold or idea.â€
Then came the challenge from another 1973 National Artist, BulakeÃ±o master sculptor Guillermo Tolentino (who also designed the seal of the Republic of the Philippines and the gold and bronze medals for the Ramon Magsaysay Award). Ocampo wrote that to ensure authenticity, Tolentino painstakingly researched and interviewed people who had known Andres Bonifacio, going so far as to even consult a espiritista (spirit medium) to discern the true likeness and character of Bonifacio. In this Caloocan landmark which Filipinos now call Monumento, he cast the hero in bronze wearing shoes, a buttoned Barong Tagalog and a handkerchief tied on his neck while standing defiantly with a bolo in one hand and a gun in other. Behind him is Emilio Jacinto and a standard bearer of the Katipunan flag.
This anak-pawisÂ  image of Bonifacio with humble origins came from the renderings ofÂ  Filipino historians from Manuel Artigas, Epifanio de los Santos, and the latterâ€™s son, Jose P. Santos and later to the eminent scholar Teodoro Agoncillo, who, together with S.V. Epistola, edited The Writings and Trial of Andres Bonifacio. However, the Jesuit Fr. Miguel Bernad,Â  in an article entitled â€œWhat Kind of Man was Bonifacio?â€ , published at Kinaadman 21 (1999) cited a study made by Dr. Glenn Anthony Pamy, a professor of history at the University of Oregon, entitled Inventing a Hero: The Re-Creation of Andres Bonifacio (New Day Publishers, Quezon City 1997, xx, 200 p.), debunking this proletarian image of Bonifacio. Among the points raised by Fr. Bernard were:
Bonifacio was not an ilustrado — that is, he was not a graduate of either a university or of a college of secondary education, but he seems to have been accepted in the company of ilustrados. Would this have been the case if he were a â€œpoor semi-illiterate proletarianâ€?
The Katipunan (contrary to Agoncilloâ€™s assertions that it included only the masses and none from the upper classes) in fact included ilustrados and well-to-do landowners. Its first head was Deodato Arellano. Eventually it was ruled by a triumvirate consisting of Bonifacio, Valenzuela and Jacinto. Pio Valenzuela was a physician. Emilio Jacinto, a graduate of Letran, was a law student at Santo Tomas. Is it likely that these men — men of education and social standing — would accept as their â€œsupremoâ€ a poor semi-illiterate plebeian?
Would well-to-do landowners like the Alvarez clan of Cavite have accepted Bonifacio with honor (even after his defeats in combat) if he had been no more than a poor ill-educated plebeian?
Historians may bicker on the true socio-economic status of Bonifacio, but the masses have appropriated his image to suit their search for a champion. Though he may have lost to Jose Rizal in the pageantÂ  for national hero and even upstaged by his nemesis, Emilio Aguinaldo in the mints of the Bangko Sentral ng Pilipinas, Juan dela Cruz would always march from Liwasang Bonifacio in Lawton to ventilate his grievances against MalacaÃ±an and sing the musical adaptation of his poem,Â  â€œPag–ibig sa Tinubuang Lupaâ€Â  in front of the U.S. Embassy to decry foreign intervention.
It is said that there is one monument which depicts Andres Bonifacio in full military regalia with a hat astride a horse, and this can only be found in Pasig City near the town proper. Perhaps this iconoclastic memorial should point the way to the national subconscious in obliterating the oral tradition of the poor, unlettered hero wearing a soiled camisa de chino or in expiating its shame for the ignominous death of the supremoÂ  divested of his bolo by his fellow revolutionaries in Maragondon, Cavite.Â  Or better still, this image should reiterate that it is not the stone or the cement that makes a monument, but the adulation of a people who can be grateful for the trials and tribulations of a noble spirit who so loved his native soil that he made the ultimate sacrifice for its freedom. (nenetgp@gmail.com)