ANGELENOS WOWED BY ARCHITECTS OF AIR’S “EXXOPOLIS” IN GRAND PARK 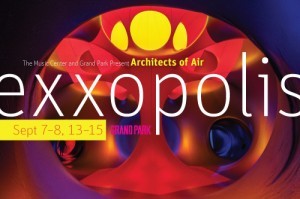 EXXOPOLIS
Step into this interactive walk-in sculpture and immerse yourself in a luminous world of light, color and sound. As the opening event of The Music Center’s World City season, Exxopolis embraces the city’s many diverse communities and traditions through performances of Random Acts of World Culture. While exploring a dazzling maze of winding paths and soaring domes, encounter performances including a Brazilian berimbau, Japanese shakuhachi, Middle Eastern oud and many more. (www.musiccenter.org)

LOS ANGELES (September 7, 2013) –  The Music Center and Grand Park introduced Angelenos to the wonders of “Exxopolis,” a luminarium that debuted in Grand Park to the delight of visitors of all ages and all backgrounds. The Los Angeles presentation of this inflatable walk-in sculpture, designed by world-renowned Architects of Air, opened to the sound of Highland bagpipes as Grand Park visitors entered Exxopolis, where they enjoyed an unprecedented, sensory experience of color, light and sound. Inspired by Islamic architecture and Gothic cathedrals, Exxopolis features a luminous maze of winding paths and soaring domes, creating an environment where the visitor’s experience is influenced by his or her own relation to space. The structure’s translucent colored PVC material filters natural light, which then reflects onto silver opaque PVC to create a space filled with remarkable colors and subtle hues. The installation will be at Grand Park on two consecutive weekends, September 7-8 (Saturday-Sunday) and September 13-15, 2013 (Friday-Sunday) and is open from 10:00 a.m. – 6:00 p.m.

In a special twist, the Los Angeles appearance of Exxopolis features “Random Acts of World Culture,” 80 short, unexpected performances held inside the luminarium that salute Los Angeles’ many diverse communities and cultural traditions. More than 30 different performing arts companies – including Korean classical music and dance, African and African American folktales, female mariachis and Klezmer melodies – are appearing inside Exxopolis during its Grand Park visit. Visual arts workshops exploring color and creativity complement the Exxopolis experience. The free presentation of Exxopolis marks the opening of the 11th season of The Music Center’s World City series, which celebrates artistic traditions from around the globe with performances and unique art-making workshops.

“It is a true honor to join The Music Center and Grand Park in introducing Los Angeles to the unparalleled experiences of Exxopolis,” said Alan Parkinson, founder, designer and artistic director, Architects of Air. “I’m delighted to see Angelenos discover the light, color, geometry, music and spaces that combine to create the distinctive and personal experience of a luminarium.”

“Grand Park visitors are transported into another world as they visit Exxopolis, which has been transformed into a metropolis of culture with music, dance and theatrical performances celebrating world arts traditions,” said Stephen D. Rountree, president & CEO of The Music Center. “As a central gathering place, Grand Park is the perfect setting for Exxopolis and the performances that salute the diverse communities and cultures that make up Los Angeles.”

Architects of Air’s “Exxopolis” in Grand Park Page 2 Parkinson first started experimenting with pneumatic sculptures in the 1980s and has since developed his own language for form in this plastic medium. At 175 feet long by 95 feet wide, Exxopolis, built in 2012, is Architects of Air’s 20th luminarium and an original design. Exxopolis acknowledges “Eggopolis,” the company’s first luminarium built in 1992. Exxopolis replaces the “gg” with “xx, to salute both the original luminarium as well as the 20th anniversary of the company. It is the company’s first luminarium to be designed primarily on a computer. Only four colors of plastic are used to generate a great diversity of subtle hues. Exxopolis’ centerpiece, “the Cupola,” features 10 ‘stained glass’ windows that rise more than 23 feet off the ground.

Advance online reservations for Exxopolis are sold out. A set number of walk-up/standby tickets, valid the day they are issued, will be available at the onsite box office each day, beginning at 10:00 a.m. There is a maximum capacity inside the luminarium at any given time; the wait time for walk-up/standby ticket holders depends on how quickly visitors travel through Exxopolis and when they exit.

For more information about Exxopolis at Grand Park, visit http://musiccenter.org/air or call 213-972-4396.

About Architects of Air

Since 1992, more than two million visitors in 40 countries across five continents have immersed themselves in the spectacular, luminous world of Architects of Air. Designed by Alan Parkinson, monumental interactive walk-in sculptures, known as luminaria, pull from ancient architecture, vibrant color themes and geometric shapes to create an awe-inspiring experience.

For more information about Architects of Air, visit http://www.architects-of-air.com

About The Music Center

Under the leadership of The Music Center, Grand Park has become a vibrant outdoor community gathering place for all which adds a new spirit and vitality to downtown. With expansive green space for gatherings large and small, Grand Park celebrates the cultural vitality of Los Angeles County and is host to community events, cultural experiences, holiday celebrations and many other activities that engage and attract visitors from all communities throughout the county. One of the biggest parks in downtown Los Angeles, the 12-acre Grand Park stretches from The Music Center on the west to City Hall on the east. Under the direction of the county, Grand Park was developed by Related Companies with an award-winning creative team, including landscape architect, Rios Clementi Hale Studios; general contractor, Charles Pankow Builders; environmental graphic design firm, Sussman/Prejza; and fountain design consultants, Fluidity.