Angelica in love: I deserve this 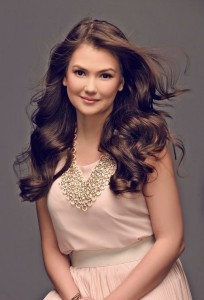 Evidently glowing and very much in love, Angelica Panganiban didn’t think this “kind of happiness” is even possible – until now.

“I’m so happy to say na nasa ‘kin lahat at naniniwala ako na deserve ko ‘to,” Panganiban told reporters when asked what she has learned from her previous “heartbreaks.”

For the 25-year-old Kapamilya star, who is reportedly in a relationship with actor John Lloyd Cruz, finding this “very high school” inspiration took careful discernment as to the “kind of love” she deserved.

The two confirmed their separation in May this year amid rumors linking Panganiban to Cruz.

Although neither Cruz nor Panganiban have gone on record confirming their relationship – this, even after they left hand-in-hand at last month’s Star Magic Ball – Panganiban could not help but express her joy from her current “inspiration.”

Looking forward, the lead star of “Apoy sa Dagat” – her latest Kapamilya epic-serye co-starring Piolo Pascual – said she can only hope that her new source of happiness, unlike her previous relationship, won’t be doomed for failure.