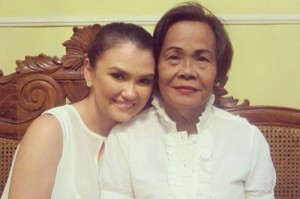 The actress expressed her grief via the microblogging site Twitter, saying she believes her mother was just waiting for their family reunion a couple of months ago.

Panganiban also posted a photo of her and her mother with the caption “I will really miss you….”

The “Apoy sa Dagat” star publicly admitted in 2010 that she was adopted by Alfredo Panganiban and Melania Panganiban.

She also revealed that her biological mother died in 2008 and was buried in Singapore.

In 2010, Angelica finally met her biological father, Mark Charlson, in the United States.

The family has yet to reveal details about the death of Mrs. Panganiban. (MNS)

Michael V. on why he stayed with ‘Bubble Gang’ through the years: ‘Loyalty is a 2-way street’