In a television interview with the singer, she revealed that she already went to the house of Regine and met the latter’s hubby Ogie Alcasid. 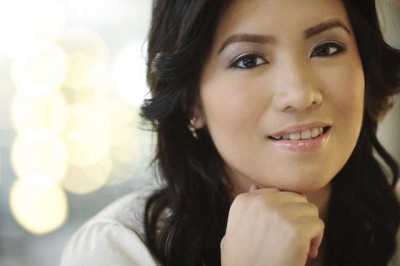 According to Angeline, Regine and Ogie’s house is breathtaking and she was speechless when they were welcomed by the hosts.

They had dinner and Angeline later on met the songwriter, who is willing to do a composition for her next album.

Angeline said she never expected that Ogie will offer to do a song for her because they only met once. What truly surprised the newbie is when Regine personally told her that she can guest in Angeline’s concert slated this May.

To recall, Angeline and Regine first met when the former auditioned for television-singing competition “Star for a Night” on the rival network.

Angeline did not win the competition. It was Pop Princess Sarah Geronimo who took home the crown.

Right now, many are saying that Angeline sounds and looks like Regine in her younger days. Angeline believes that no one can replace the Songbird and she is in the industry to prove herself to the viewing public.

The singer is hopeful for a successful career ahead of her and more collaborations with big artists in the country. Balita Media Inc.’s website is balita.com. (MNS)

Gretchen Ho denies she is pregnant