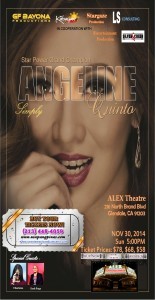 The multi-talented Angeline Quinto has won all the major singing awards and competitions of her generation. She began her meteoric ascent in 2003 at “Star for a Night,” the national TV contest hosted by Asia’s Songbird, Regine Velasquez, wherein she dueled with Sarah Geronimo, Mark Bautista and Mau Marcelo – all certified stars – in the exciting grand finals, in a performance that impressed Sharon Cuneta, one of the judges.

At her next major TV competition, “MTB: Teen PopStar” in 2005, she ousted international winner Jonalyn Viray during the pre-finals and tied with Sherilyn Flores for the grand prize. In 2010, she joined GMA-7’s “Diz Iz Kantahan: Challenge the Champion,” where she was a wildcard finalist.

In 2011, Angeline was invited by Sharon Cuneta to compete in the singing contest she hosted, “Star Power: Sharon’s Search For the Next Female Pop Superstar.” After three rounds of competition, she emerged victorious, winning $1 million and a recording contract from Star Records. Later, Angeline joined Sharon Cuneta in her U.S. concert tour.

She is also coming into her own as an actress, performing in major films like Born To Love You, Four Sisters and a Wedding, Bakit Hindi Ka Crush Ng Crush Mo?, and Beauty in a Bottle.

As a host and performer, Angeline is regularly seen in “ASAP Rocks” on ABS-CBN.

Her numerous awards include:

●      The Philippines’ Most Downloaded Artist for 2012, Best Inspirational/Religious Recording (for “Lipad ng Pangarap”) and Best Song Written For TV/Movie/Stage Play (for “Nagiisang Bituin”)—all at the 26th Awit Awards in 2013

When will Richard, Sarah Lahbati tie the knot?