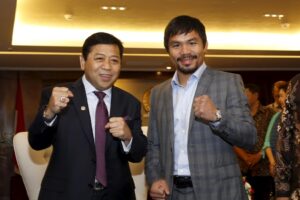 Macau, Macau (AFP)  – Veteran boxing promoter Bob Arum has blasted the injured Manny Pacquiao for missing a planned rehab visit to his doctor and says he has no idea when “Pacman” might return to the ring.

“As far as I’m concerned he’s not an active fighter,” said Arum, adding that Pacquiao had “not been acting very professionally.”

Pacquiao had surgery on May 7 to repair a torn right shoulder rotator cuff sustained in the unanimous points defeat against Floyd Mayweather in the richest fight of all time in Las Vegas five days earlier.

But Arum confirmed the Philippines congressman cancelled a planned check-up with his surgeon Neal ElAttrache at the Kerlan-Jobe Orthopedic Clinic in Los Angeles on July 4.

“Pacquiao was supposed to come over to see the doctor and for some reason he decided to cancel it,” Arum told AFP.

“So he’s not acting very professionally.”

Just days after he had been due to see the surgeon, Pacquiao instead travelled to Indonesia in a much-publicised trip to film a television advertisement and visit to a Filipina on death row.

Mary Jane Veloso was sentenced to death in Indonesia after being arrested in 2009 with 2.6 kilograms of heroin sewn into the lining of her suitcase.

“We’re hoping to help save Mary Jane’s life, I think Mary Jane is a victim of human-trafficking,” Pacquiao said after visiting the single mother of two young children in Wirogunan prison on the main island of Java on July 10.

But Arum insisted that the 36-year-old’s first priority should have been to be back in Los Angeles for an appointment with his surgeon to decide on his rehabilitation program.

“He’s a grown man and he makes his own decisions but as far as I’m concerned he’s not an active fighter.”

Mayweather has since been stripped of the WBO welterweight belt he won for beating Pacquiao after he failed to meet a deadline to pay a $200,000 sanctioning fee for the May 2 fight.