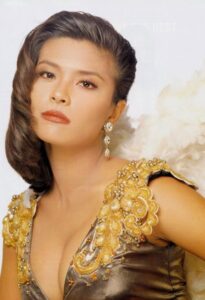 Abayari confirmed that Bunevacz sold her car and Rolex watch, as reported in some entertainment websites. She added that her ex-boyfriend also tried to sell her condominium unit.

Abayari said that since the incident, she has not seen Bunevacz in Los Angeles, where she is also based.

“I think by the grace of God, I have never run into him,” she said in jest. “He’s also in LA. I don’t even know how I would react up to this point [kung magkita kami].”

The former sultry actress went on to recall an awkward moment after she and Bunevacz called it quits.

She said Bunevacz still visited her condo unit even if he is already engaged to another woman.

Despite her failed relationship, Abayari said she is still happy with how her life is going, noting the other blessings she has received over the years.

“I know I still have a lot of blessings kasi,” said the actress, who was involved in a drug case in Guam in 1999.

After experiencing all the pain in the past, Abayari said she’s happy being blessed. (MNS)