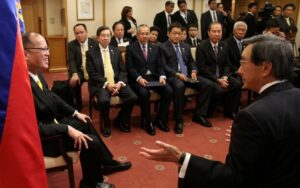 (TOKYO, Japan) President Benigno S. Aquino III exchanges pleasantries with Marubeni officials, led by chairman Teruo Asada, during the courtesy call at the Momo Room of the Imperial Hotel on Tuesday (June 01) during his State Visit to Japan. (MNS photo)

In his message during the get-together with members of the Filipino community in Japan, held at the Okura Hotel, President Aquino said his administration has been aggressive in pursuing major PPP projects for the benefit of the country. 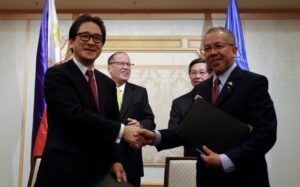 (TOKYO, Japan) President Benigno S. Aquino III and Ambassador Manuel Lopez witnesses as Trade and Industry Secretary Gregory Domingo and JETRO chairman Hiroyuki Ishige sign the Memorandum of Understanding on Business Promotion Cooperation during the meeting at the Ume Room of the Imperial Hotel on Tuesday (June 02) as part of his State Visit to Japan. (MNS photo)

President Aquino reported that 15 PPP projects are in the pipeline, and are already in the process of procurement and roll-out.

He noted that under the “tuwid na daan” good governance, his administration has surpassed the number of solicited PPP projects approved under the past three administrations. 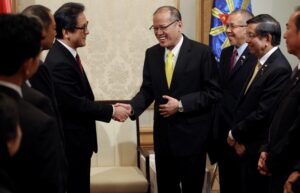 Only six PPP projects were approved during the Ramos, Estrada and Arroyo governments, he said.

He attributed the increased participation of the private sector in PPP projects to the government’s anti-corruption initiatives. 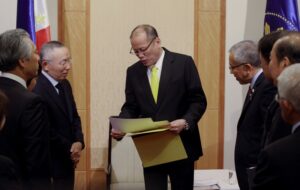 Reforms in government have created a much better playing field for businesses, increasing competition among the players and boosting investor confidence, he said.

The President also lauded the Department of Public Works and Highways (DPWH) for its reform initiatives.

Under the leadership of Secretary Rogelio Singson, President Aquino said the DPWH has been choosing the right projects at the right cost with better quality and timetable.

Efficient management in the DPWH has resulted in P39 billion in savings as of March this year, he said. (MNS)

5,000 scheduled to become U.S. citizens at the L.A. Convention Center

PHL allows phone use on planes