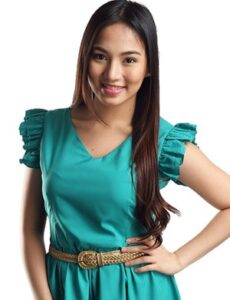 As Karen, Joanna will compete with series heroine Neri (played by Kim Rodriguez) for the love of Kiko Estrada’s Craig. More, Karen will also make life miserable for her younger sister Heidi, played by Tricia Cabais.

Joanna didn’t have qualms accepting the role, relating how it poses creative challenges for her as an actress. Note that prior, Joanne turned heads for her “bida-kontrabida” role in “Strawberry Lane.”

“What challenges me is how will I do a villain role that’s different from my past villain role,” she remarked.

“There are old fashion ways of portraying a villain. I don’t want that. I want people to see where my character is coming from. I want them to understand why I do bad things,” she opined.

Joanna is thankful that the series director Neal del Rosario pushes his actors to do their best.

Happy as she is with her current career trajectory, Joanna wants to do more “mature” roles in the future. She made clear, however, that this does not mean she is ready to accept sexy roles.

“Portraying mature roles doesn’t mean I have to show this or that. It’s more on how I should attack a role or what the story is about. If I’m ready and if my body is also ready it’s then that I would think about doing sexy roles,” intimated Joanna.

Stepping into showbiz when she was only seven years old, Joanna is thankful that God surrounded her with “positive people” who inspire and help her attain her dreams.

“I was really a nobody before. I was just an extra walking in and out of scenes,” she recalled.

Aside from being an actress, Joanna was once a Sangguniang Kabataan Chairman in Caloocan City.

She was recently chosen as one of the four World Youth Alliance (WYA) Ambassadors in the Philippines, along with Kristoffer Martin, Charice Pineda and Julian Trono. (MNS)