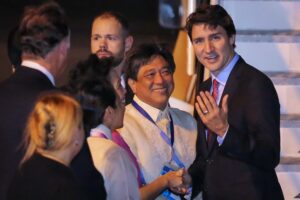 Canadian Prime Minister Justin Trudeau gestures as he is welcomed by Philippine and Canadian officials shortly upon his arrival at the Ninoy Aquino International Airport on Tuesday. Trudeau joins other leaders in the 21st APEC Economic Leaders’ Meeting in Manila. (MNS photo)

Manila, Philippines | AFP |  – The dashing good looks of Canada’s prime minister and Mexico’s president have sparked the unlikely hashtag “#APEChottie” to go viral at a gathering of world leaders in the Philippines.

For much of the last week, Manila’s social media has been filled with angry tirades at the huge traffic disruption caused by security measures for the two-day Asia-Pacific Economic Cooperation (APEC) summit.

But in the last day the mood has improved as Filipinos lose themselves in the dreamy eyes of Prime Minister Justin Trudeau and President Enrique Pena Nieto.

Their arrival in the steamy Philippine capital has got tongues wagging and keyboards clicking, with both social and traditional aedia filled with compliments for the pair.

For the diplomats, policy wonks and business leaders in Manila, US President Barack Obama and his Chinese counterpart Xi Jinping are the only show in town.

Not so for the Philippine Daily Inquirer, which put the Mexican and Canadian leaders on its front page and asked readers: “Are you with Team Nieto or Team Trudeau?” 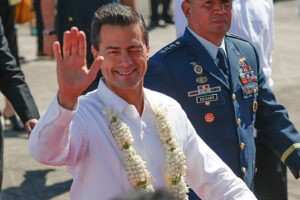 Mexican President Enrique Peña Nieto winks to the crowd after his arrival at the Villamor Air Base in Pasay City on Tuesday. President Nieto will be attending the Asia Pacific Economic Cooperation meeting with 20 other leaders of member-economies on November 18-19 in Manila.(MNS photo)

Many Filipinos flocked to social media to declare which kind of political eye candy they preferred.

“Not sure if Canadian prime minister or Disney prince” wrote @imjesstorres on Twitter, adding the hashtags #APECHottie and #PrinceEricIsReal.

For @jochendria it was Nieto who came out on top.

“Trudeau and Nieto. Hmmm… I choose the latter. #APECHottie”.

“I’m sorry but he’s too attractive,” posted @anndiazpiquero, who used more than just words to express her admiration for Nieto – adding an emoji face with two hearts for eyes.

Facebook user Santi Galasi summed up the APECHottie phenomenon as follows: “An example of that wonderful Filipino trait where, despite being screwed over by circumstances, we find a reason to be happy.”