NEW YORK, December 26, 2010 (AFP) – Apple dethroned Microsoft as the world’s most valuable technology company in 2010 as its co-founder Steve Jobs soared to new heights with the touchscreen iPad tablet computer and the latest iPhone.

Britain’s Financial Times last week named Jobs its “Person of the Year” and even US President Barack Obama joined in the plaudits to the 55-year-old chief executive of the Cupertino, California-based gadget-maker. 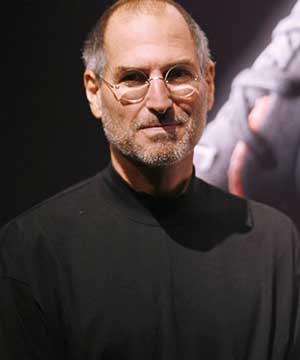 Jobs’ appearance on a San Francisco stage in January to unveil the iPad capped what the FT called “the most remarkable comeback in modern business history.”

“It wasn’t simply a matter of the illness that had sidelined him for half the year before, leaving him severely emaciated and eventually requiring a liver transplant,” the newspaper said.

“Little more than a decade earlier, both Mr. Jobs’ career and Apple, the company he had co-founded, were widely considered washed up, their relevance to the future of technology written off,” it said.

Obama, at a White House news conference on Wednesday, held up Jobs as an example of the virtues of the “free market.”

“We celebrate somebody like a Steve Jobs, who has created two or three different revolutionary products,” Obama said. “We expect that person to be rich, and that’s a good thing.”

The iPad hit stores in the United States in April and Apple reported sales at the end of September of more than eight million of the devices that the FT said offer a glimpse into a world without a computer mouse or Windows.

Other technology firms are trying to match Apple’s success with tablets of their own, including South Korea’s Samsung, Canada’s Research In Motion, maker of the Blackberry, and US computer giants Hewlett-Packard and Dell.

But none has yet to prove capable of preventing Apple from establishing the same dominance over the tablet computer market that it exercises over the MP3 music player scene with the ubiquitous iPod, introduced in 2001.

Goldman Sachs said it expects Apple to ship 37.2 million iPads in 2011 – “which could potentially make Apple one of the largest vendors in the global personal computing market” — tablets plus personal computers.

The iPhone 4, the latest version of the touchscreen smartphone introduced by Apple in 2007, sold 14.1 million units in the quarter which ended in September, up 91 percent over the same quarter a year earlier.

Even Apple TV, a product Jobs once dismissed as a “hobby,” is notching up strong sales. Apple said last week that sales of the latest model of the set-top box that can stream content from the Web had topped one million units.

The rare blemishes on Apple’s record in 2010 were its continuing inability to come out with a promised white model of the iPhone 4 and complaints of lost reception due to the radical antenna design on the device.

Apple shares, worth 10 dollars at the end of 2003, gained around 60 percent this year, closing at more than 320 dollars on Wall Street on Thursday.

In May, Apple surpassed Microsoft as the largest US technology company in terms of market value. The only companies with larger market capitalization than Apple’s nearly 300 billion dollars are ExxonMobil and Petrochina.

Meeschaert New York analyst Gregori Volokhine described Apple’s rise as “absolutely extraordinary” and said “every analyst has an even higher target price for next year, between 360 dollars and 430 dollars.”

“Apple’s more than just a company,” Volokhine told AFP. “It’s become a cultural phenomenon. The hard part now will be not to disappoint.”