Aquarium of the Pacific experience more than educational

Visitors to the Aquarium of the Pacific in Long Beach not only enjoy a vicarious journey into the bottom of the sea during their visit but they get more in terms of being given the opportunity to discover that beneath the surface lurks a breath-taking milieu that they can only discover because they’ve been afforded the opportunity without getting wet.

The late Jacques-Yves Cousteau, a French naval officer, explorer, conservationist, filmmaker, innovator, scientist, photographer, author and researcher who studied the sea and all forms of life in water shared the beauty of his underwater discoveries to his followers for many years and from the confines of many living showed in vivid color the wondrous creations beneath the waves. 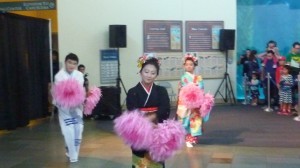 ASIAN CULTURE AT THE AQUARIUM: Autumn affords multi-ethnic groups in California to share the richness and beauty of their cultures by way of festivals like the Autumn Festival of the Aquarium of the Pacific in Long Beach over the weekend. It was Japan’s shining opportunity with their group’s rendition of their dance number called Kyo No Kai. North Ridge-based Malaya Filipino American Arts had its window to present the beauty of Filipino dances on the first day of the two-day annual event.

The beauty underneath the waves belongs to humanity and must be enjoyed by all. Exploring the sea per se is an expensive proposition but thanks to committed people behind the Aquarium of the Pacific, which formerly was known as Long Beach Aquarium of the Pacific, for letting people enjoy the experience of being awed by the splendor and color of the ocean.

The weekend of Veterans Day at the Aquarium was a punctuated experience to hundreds for the who were part of the 13th Annual Autumn Festival which “highlighted the traditions and cultures of Japan, China, Korea, and the Philippines”.

The “learning weekend” had families with members of all ages enjoy the two-day event soaked  with family-centered activities and savored  the opportunity to celebrate the  diversity of Asian and Asian American cultures”.

The Festival was a “getting to know you more” occasion for the participating Asian countries with features that included traditional crafts, music, dance, demonstrations, cultural arts exhibits, ethnic cuisine, storytelling, and much more which probably more than anyone could handle in such a short visit. 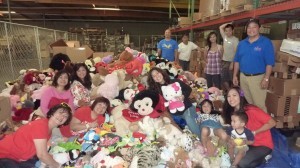 PHL-BOUND TOYS: Attention of kind-hearted Fil-Ams shift momentarily to the marginalized children at the charity wards of various Philippine hospitals for the nonprofit Guardian Angels of America Foundation through its toy giving project now on its seventh year. The sea of donated toys have now been stuffed in close to a dozen balikbayan boxes for shipment to the Philippines to bring cheers to hundreds of children.

The richness and color of  Philippines culture was featured on the first day of the event with presentations courtesy of the Malaya Filipino American Dance Arts performing group who afforded the Saturday audience a glimpse of our heritage.

The Aquarium of the Pacific is situated on a 5-acre land area and  attracts more than 1.5 million visitors annually.  Reports have it that the Aquarium is manned by over 900 people who include more than 300 employees and some 650 volunteers.

As a non-profit group, the Aquarium is committed to “instill a sense of wonder, respect and stewardship for the Pacific Ocean, its inhabitants, and ecosystems.”

The Aquarium features a collection of over 11,000 animals representing over 500 different species in exhibits ranging in size and capacity from about 5,000 to 350,000 gallons, according to a report.

The exhibits introduce the inhabitants and seascapes of the Pacific, while also focusing on specific conservation messages associated with each region in three permanent galleries – Southern California and Baja, the Northern Pacific and the colorful reefs of the Tropical Pacific.

Voter IDs for registered Filipinos now at the Consulate