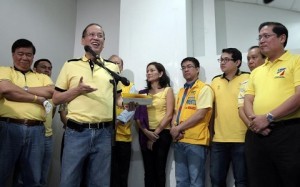 This can also mean a change in the Senate’s leadership, Sen. Sergio Osmeña III told reporters on Thursday.

“You can practically be definite it will happen,” he said.

Osmeña, who has been helping the campaigns of some senatorial candidates, said the surveys indicate that the Aquino administration “will be able to garner a majority.”

He added, however, that survey results can still change as the elections draw near.

Osmeña said that if the coalition among senatorial candidates from the Liberal Party and Nacionalista Party-which were rivals in the 2010 elections-holds out, they can have the numbers in the 16th Congress.

He believes their numbers would be enough to install a new Senate president. Among the possible candidates is Sen. Franklin Drilon, a staunch Aquino ally and LP’s campaign manager.

Osmeña said he has been a campaign adviser to Team PNoy senatorial candidates Bam Aquino and Grace Poe, while also helping some candidates from the opposition United Nationalist Alliance.

But he does not want to take credit for Aquino’s and Poe’s rise in the surveys.

“The common denominator between these two is that they’re young, they’re well-educated, and they have a very clean record,” Osmena said. “To top it all, most of our voters are very young also. I guess the appeal has been there and the connection has been established.” (MNS)