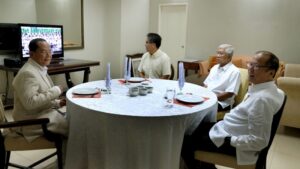 At a media briefing here, Aquino said he will review the Bureau of Customs’ proposed new policies in balikbayan box inspections with customs and finance officials on Monday afternoon.

The BOC has earlier announced that it will issue stricter guidelines on balikbayan boxes by October in an effort to curb technical smuggling.

In various posts on social media, OFWs complained that the measure would be an additional burden to them.

Others have urged their fellow migrant workers to stop sending their packages until BOC clarifies the plan.

Meanwhile, Customs chief Alberto Lina defended Monday the agency’s plan to open balikbayan boxes, saying the bureau is mandated to prevent the entry of contraband items as well as assess the value of items that need to be taxed.

Lina said that under the law, the bureau can inspect all balikbayan boxes entering the country.

He said the Bureau of Customs is hiring people to inspect up to two percent of 800,000 balikbayan boxes, or about 16,000 boxes, entering the country. He said the US Customs bureau also inspects about 2 percent of all incoming packages.

“We are hiring people to add on to the Bureau of Customs now,” he said.

The Customs chief noted that only returning overseas Filipino workers are given tax exemptions for items with value of up to P10,000, based on a presidential decree issued by then President Fidel Ramos.

Every item sent via balikbayan box is taxable, he added.

“[If you live abroad], you can bring anything but you will be taxed. There is no exemption. If you are a balikbayan with the intention of coming back to our country, with your passport and everything, like people who have studied abroad or returning OFWs, these are the only people given the privilege to bring in goods and that will not be taxed if the value of the goods is P10,000 and below,” he said.

He denied that the actual exemption is $500 and below, saying the exchange rate then when the presidential decree was issued was about $1:PHP7 or about P3,500. He said the exemption has been raised to P10,000.

Lina said items sent via balikbayan box will need to be assessed for duties and value-added tax. He said Customs inspectors need to open the boxes to check the items unless there is a packing list and invoice attached to the box.

Overseas Filipinos can list the items and present it to a broker, which will present the list to Customs. Lina, however, noted that brokers and freight forwarders do not submit these lists to Customs “so they would not have to pay duties and taxes.”

“The duty is 1 percent and VAT is 12 percent. The duty can go higher to 3 percent, 5 percent or 10 percent, depending on item that you are bringing into this country,” he said.

He cited as an example overseas Filipinos sending flatscreen TVs to their loved ones, saying these items should still be taxed 12 percent plus an additional 1 percent duty.

“We are asking our kababayan to declare right away, when they send a shipment there. They should email it or they should prepare a manifest together with the invoice so that the broker or the forwarder can file it properly.”

Even secondhand items such as bags or even a gift will need to be taxed.

“That is where the examiner will place a value. There is a secondhand value for Louis Vuitton bags here. That is the law, we have to follow the law,” he said.

Lina noted the bureau is mandated to prevent the entry of drugs, contraband items and even weapons of mass destruction, noting that various contraband items are being smuggled into the country through those boxes.

The Customs chief said the agency will get K-9 units to inspect balikbayan boxes for possible contraband items. The boxes will also be placed inside x-ray machines.

Lina warned that misdeclared items will be confiscated including microwave ovens, speakers and other household items. Items such as pornographic magazines will also be seized since these are banned.

He said confiscated items will be auctioned although the owner can still pay taxes “if that is really just a negligible thing.”

“If you are not honest, we will go after you. The word is honesty, here. You have to declare,” he said.

During the interview, the Customs chief was shown a photo of a balikbayan box that was opened by Customs inspectors.

Asked if this is OK with him, Lina said: “Hindi okay.”

Asked who should pay for the missing and destroyed items, he said: “Well, kung ang may kasalanan ay yuong Customs, kami ang magbabayad. Hindi pa naman natin natatanong kung sino ang may kasalanan dito. It was not only Customs [that opened the box.] The freight forwarder and brokers were also there.”

He said that freight forwarders sometimes open the boxes while packing the boxes inside the shipping containers.

Lina urged Filipinos to use only trusted freight forwarders and brokers so that their items will not go missing.

Asked about the possibility that unscrupulous Customs inspectors would steal the items, he said: “I assume I can trust my own people. I will assume it for the time being. You are just telling me that Customs is corrupt.”

He said Customs can track which person inspected the boxes since there are several representatives present when the boxes are opened including the examiner, the intelligence officer, the freight forwarder and office of the collector.

“We will answer there if there are really issues that are attributable to Customs. They have to prove it, that we are the ones at fault. It is unfair.”

He added: “We will take care of your goods. Nothing will be lost under my care provided you are honest.” (MNS)