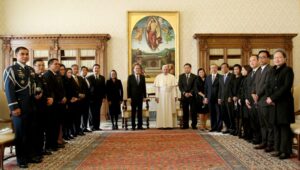 (VATICAN) President Benigno S. Aquino III and His Holiness Pope Francis pose with the Philippine delegation for a group photo opportunity at the Sala del Tronetto of the Apostolic Palace following the private audience on Friday (December 04). (MNS photo)

MANILA (Mabuhay) – President Benigno Aquino III said that the passing of the Bangsamoro Basic Law (BBL) will likely prevent the growth of extremism in the country, a threat that has become imminent following the increase in local bandit groups pledging support for ISIS.

In a press briefing, Aquino who was Italy for a state visit, mentioned that an official in the Vatican City praised the country’s push for the BBL, as it is being seen as a driver for peace.

“I think it was the Secretary of State of the Vatican who was saying that we can serve as an example of how to reach out to our Muslim brothers and achieve peace, and especially in the spirit where extremism is such a threat worldwide, that example might be useful to others to build upon as a response to the radicalization that is happening,” he said.

“We also mentioned that the Abu Sayyaf, for instance, claims that they were once part of the Al Qaeda network. Now they claim that they are part of the ISIS network, and if there is another group that comes up, I assume they’ll also be—they will claim also being the local affiliate,” he said.

“But we did emphasize that, to a large degree, they are more of a bandit group rather than a religious ideological group. And we are hoping that it doesn’t move in that direction that’s why (there is) the continuous effort (on the) BBL,” he added.

Although he has less than a year left as president, Aquino is still hopeful that the BBL will be passed by Congress.

“Now, I am still confident that there is still a very strong push that can be made. Of course, we’d want it to happen sooner rather than later, but at the end of the day, I think the movement towards having the BBL in its present form or with a little modification is really just a question of time.,” he said.

The BBL seeks to create an autonomous political entity known as the Bangsamoro Autonomous Region in Mindanao putting in practice the peace agreement between the Philippine Government and the Moro Islamic Liberation Front.(MNS)

President Aquino orders Department of Foreign Affairs, Department of Justice and Office of the Executive Secretary to conduct a research and craft roadmap for peaceful solution of Sabah issue