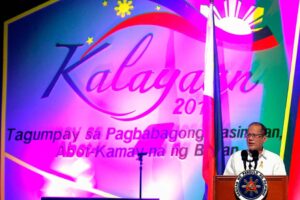 President Aquino graces the Filipino-Chinese community’s 117th Philippine Independence Day celebration at the PICC in Pasay City on Monday. The organizers decided to forego the 40th anniversary celebration of diplomatic relations with China because of ongoing tensions between the two countries.
(MNS photo)

MANILA (Mabuhay) – President Benigno S. Aquino III told Chinese-Filipino businessmen on Monday that the relationship between the Philippines and China could improve, so long as it is anchored on mutual respect and a firm commitment to the rule of the law.

“In trade and investment, as with all other aspects of the relations between the Philippines and China, there is much that we can improve on – as long as our relationship is strengthened by mutual respect, the determination to maintain fairness and harmony, and a firm commitment to the rule of law,” President Aquino said as he addressed the Federation of Filipino-Chinese Chambers of Commerce and Industry Inc. (FFCCCII) and the Filipino-Chinese Community’s early celebration of the 117th Philippine Independence Day, held at the Philippine International Convention Center in Pasay City.

“Let me emphasize that this does not only take place on the level of governments: everyone, including businessmen and captains of industry like yourselves, has a role to play,” he added.

The President noted that in the course of the country’s history, Chinese Filipinos have contributed to nation building, joining the struggle for independence from foreign colonizers, standing up for the people’s rights during the Marcos dictatorship, and even excelling in Filipino art and culture.

“As Filipinos, they, in their everyday lives, did their part to build our nation. This is being continued by the FFCCCII. Your economic and civic contributions are vast; you have provided jobs to so many of your countrymen through the companies you manage and own,” he said.

At the same time, he said, Chinese Filipinos have also helped build classrooms for public schools and housing for Filipinos affected by Typhoon Yolanda; extended assistance to victims of other tragedies, including the recent factory fire in Valenzuela; conducted medical missions; and supported the national police.

“That is why we have always been determined to work with other nations to improve our collective fortunes, economic or otherwise,” he said, citing that in 2011, the Philippines sent almost 830,000 tourists to China, at a time when Chinese tourists visiting the Philippines only numbered about 190,000.

He said the country improved this through the years, sending nearly 1 million Filipino tourists to China in 2013, even though only 426,000 Chinese tourists visited the Philippines in the same year.

“The discrepancy is heightened especially when you take into consideration that our country represents only around 1/13th of China’s total population,” he pointed out.

In terms of trade and investment, he noted that in 2011, Filipino foreign direct investments into China were estimated at $2.8 billion, while Chinese investments into the Philippines were only at about $600 million.

He thus enjoined everyone to “strive to do our part in enhancing cooperation and unity, as our forefathers did—whether to uplift the lives of Filipinos on our shores, or to work towards fostering stability that will redound to the benefit of all.” (MNS)