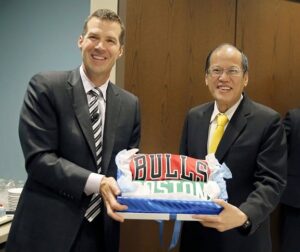 MANILA (Mabuhay) – President Benigno Aquino III met with business organizations during his official visit to Chicago, Illinois during which the Philippine leader cited the need to improve connectivity in transportation and expand facilities of the existing nautical highway.

One of the points Aquino raised during the roundtable discussion was the need to improve connectivity in transportation, he added.

As an archipelago the Philippines needs to expand an existing nautical highway, improve ports and roll-on and roll-off facilities, the President said.

Transportation’s role in trade was also discussed during the meeting. FedEx managing director Ralph Carter said the logistics company is willing to assist in transporting high-quality marble products from Romblon to international markets.

For Keith Williams, former vice president of the US-ASEAN Business Council, it is important to employ generation-skipping technology in accelerating the pace of Philippine growth and development.

Executives from Microsoft and JP Morgan Chase & Co. said they appreciate the talent and competence of Filipino workers.

Melissa Bean, chairman of JP Morgan Chase-US Midwest, said they have been operating a global service center in the Philippines since 2005 with more than 13,000 employees.

A senior officer from Microsoft, meanwhile, said his company has been involved in the Philippine business sector for 20 years, adding that they have a joint project with the Philippine National Police on cyber-security.

Aquino arrived in Chicago on Wednesday afternoon (Chicago time) for a one-day working visit to the US prior to a three-day state visit in Canada.

It was his first trip to Chicago since he assumed office in 2010.