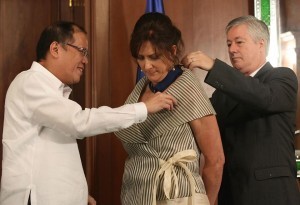 President Benigno S. Aquino III confers the Order of Lakandula with a rank of Grand Officer (Maringal na Pinuno) on outgoing United Nations (UN) Resident Coordinator Luiza Carvalho during the Farewell Call at the Music Room of the Malacañan Palace on Monday (October 27, 2014). Carvalho was cited for her important contribution in further strengthening and deepening the relations of the Republic of the Philippines with the United Nations. The Order of Lakandula is the Order of Political and Civic Merit of the Republic. Also in photo is Mr. Jose Renato Carvalho, spouse.(MNS photo)

MANILA (Mabuhay) – President Benigno S. Aquino III on Monday conferred the Order of Lakandula, with the rank of Grand Officer, on United Nations Resident and Humanitarian Coordinator in the Philippines Luiza Carvalho.

The President gave the award to Carvalho during her farewell call, held at the Music Room of Malacañang Palace.

Carvalho, who is also the resident representative of the United Nations Development Programme (UNDP), was honored for strengthening and deepening the relations between the Philippines and the UN; for her outstanding and dedicated service in the field of humanitarian work, peace and development; and for being an “exceptionally worthy and competent representative” of the UN in the country.

She was also recognized for her “steadfast efforts in promoting partnerships between Philippine private and public institutions, with the end view of providing support to marginalized communities”.

The Chief Executive acknowledged her efforts in mobilizing international support to the Philippines in sectors of crisis intervention and emergency response, disaster risk reduction management, good governance, education, and social welfare and development.

Carvalho was also praised for her contribution and support to the Philippine initiatives in the domestic, regional and multilateral arena, especially in the areas of human rights, empowerment of women and peace building and conflict resolution.

Carvalho was joined by her spouse and other UN officials. (MNS)