Aquino confers Order of Sikatuna on outgoing Ambassador of Korea 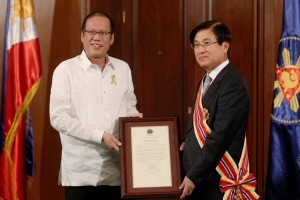 President Benigno S. Aquino III confers the Order of Sikatuna with a rank of Datu (Grand Cross, Gold Distinction) on outgoing Republic of Korea Ambassador to the Philippines Hye Min Lee during a farewell call at the Music Room, MalacaÃ±an Palace on Monday (September 03). Lee was cited for his service in the field of international relations and for having been an exceptionally worthy and competent representative of his Government in the Philippines; for his steadfast contributions to strengthening bilateral relations between the Philippines and Korea, and for his support to enhance people-to-people exchanges through the promotion of tourism. (MNS photo)

MANILA, Sept 4 (Mabuhay) –Â President Benigno S. Aquino III conferred the Order of Sikatuna with the rank of Datu (Grand Cross, Gold Distinction) on outgoing Republic of Korea Ambassador to the Philippines Lee Hye-Min in recognition of his contribution to strengthening the foundation of friendly bilateral relations with the Republic of Korea during ceremonies held in Malacanang Palace on Monday.

The Chief Executive conferred the award during Ambassador Leeâ€™s farewell call at the Music Room in MalacaÃ±ang Palace on Monday afternoon.

The citation was read by former Ambassador Miguel A. Perez-Rubio, presidential chief of protocol.

Ambassador Lee was cited in the field of international relations and for facilitating official development assistance in support of his country to the various projects of the Philippine government.

During his tour of duty to the Philippines, Ambassador Lee was commended for his significant contribution in setting up the P150-M modern rice processing facility in Iloilo to help stabilize the rice supply in the country. The facility was inaugurated last March.

The Iloilo rice processing complex (RPC) is one of the four facilities funded by a grant from the Korean government through the Korea International Cooperation Agency.

Last August, President Benigno S. Aquino III witnessed the signing of a loan agreement between the Philippines and South Korea for the Jalaur River Multipurpose Irrigation project in Iloilo.

The loan agreement also marked the largest-scale assistance for a single project extended by the South Korean government to the Philippines through South Koreaâ€™s Economic Development Cooperation Fund since its establishment in 1987. (MNS)

GMA Worldwide Inc., showcasing the Kapuso brand to the world