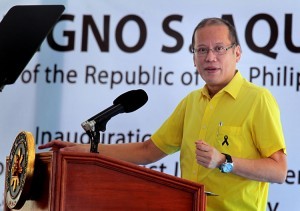 Aquino expressed confidence the sin tax bill and the remaining Anti-Money Laundering Act amendment will be passed by Congress before elections next year.

â€œThereâ€™s an estimated, if Iâ€™m not mistaken P31 billion increase in revenues from this proposed measure, and itâ€™s earmarked 15% or so for the farmers. The rest will go into health services. Now every province, and there are many provinces involved in tobacco cultivation that already have significant amounts of revenues that will accrue to them once this is passed. In effect, everybody should benefit from it,â€ he said.

The sin tax reform bill is one of the Aquino administrationâ€™s priority measures, which has been certified as urgent.

The House of Representatives has already approved the bill, which sets a two-tier system for tobacco products and three-tier system for alcohol products, depending on net retail price. However, the Senate has yet to pass its counterpart measure.

Philip Morris Fortune Tobacco, which dominates the local market, has complained the sin tax measure will result in a 708% increase on taxes on low-priced cigarettes in the country.

â€œWell itâ€™s a sin tax. Weâ€™re trying to discourage behavior and I think they are already addressing that in so many other markets that they are engaged it, why should the Philippines be an exemption,â€ Aquino said.

Aquino considers the sin tax law and the AMLA amendment to be priority measures, even over a proposed measure that will increase the governmentâ€™s share in mining revenues.

â€œThe sin tax measure is in a mature form already. Weâ€™re very close to that, the other is the third law with regards to the Anti-Money Laundering, which is also a priority. In effect, there are so many priorities, they really have to make a firm priority. So the mining, I think can wait a little while, becasue there are the two that are more important than this one, at this point in time,â€ he said.Â  (MNS)