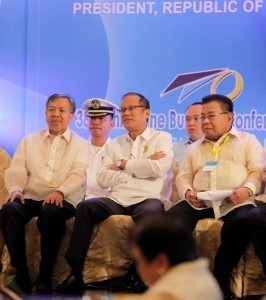 President Benigno S. Aquino III graces the 38th Philippine Business Conference and Exposition (PBC&E) hosted by the Philippine Chamber of Commerce and Industry (PCCI) at the Fiesta Pavillion, The Manila Hotel, One Rizal Park in Manila City on Thursday (October 11, 2012). With theme: “One. Global. Filipino. Investments and Governance, Pillars of Economic Growth”. The PBC&E is the biggest gathering of local and international businessmen in the country where intense and no-holds-barred dialogue between business and government leaders takes place to draw up business and economic resolutions and policy pronouncements. Also in photo are Trade and Industry Secretary Gregory Domingo, PCCI president Atty. Miguel Varela and PCCI Council of Business Leaders chairman Jose Pardo. (MNS photo)

In his speech during the 38th Philippine Business Conference and Expo (PBC&E) at the Fiesta Pavillion, Manila Hotel, Thursday, President Aquino said that the continuously growing economy in the country was the result of the administration’s focus on fiscal management and reforms within the bureaucracy.

“Today I tell you… we have a winning strategy in our hands. You are no doubt aware that the growth of our economy this year has been robust in contrast to the slow growth we continue to see in other parts of the world. The average GDP growth for the first semester of 2012 has exceeded expectations at 6.1 per cent which gives us good reason to believe that we will be able to achieve this year’s projected GDP growth of between five to six per cent. We must also note that our 2011 debt to GDP ratio was marked at 50.9 per cent lower than the 52.4 per cent recorded in 2010,” the President said.

“These are the results of our commitment to balance pro-active fiscal management, prudent spending and reforms to increase competitiveness, because of these different organizations have expressed optimism for our economic future. For instance, we have recorded a second consecutive 10-place jump in the World Economic Forum’s 2012-2013 Global Competitiveness Report,” he added.

The Chief Executive also noted the growing number of stakeholders from the private sector that are expressing confidence in the government’s sincerity in implementing reforms founded on the principles of accountability and good governance.

“What is most encouraging to me is that the number of private entities that have signed the integrity pledge has more than doubled from 700 signatories in 2011 to 1500 signatories not including government agencies as of mid-September… I expect that this number will only continue to grow as more corporations and businessmen feel the benefits of reform,” President Aquino said.

“As we continue to walk along the straight path to mutual progress and inclusive growth, let us not forget our 95 million partners in this endeavor… in this way if we continue to work for the interest of not just one company or the government but for all, I am certain that we will have enjoyed truly meaningful success by the time I pass on the torch, hopefully to someone who will sustain our momentum,” he added.

The PBC&E is the biggest gathering of local and international businessmen in the country where intense and no-holds barred dialogue between business and government leaders take place to draw up business and economic resolutions and policy pronouncements.

Anchored on the event’s theme of “One Global Filipino, Investment and Governance, Pillars of Economic Growth,” the group presented the 38th PBC Resolutions covering the fields of Agriculture, Education, Energy/Power and Water, Environment, Mining, Housing and Construction, Information and Communications Technology and Transportation. (MNS)

Monkeypox is not Covid-19 — PBBM

Get milk, get sleep!

Fil-Am from Cavite is California Teacher of the Year