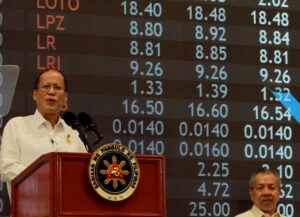 President Benigno S. Aquino III delivers his speech during the Philippine Stock Exchange, Inc. bell ringing ceremony at the PSE Ayala Trading Floor in Ayala Avenue, Makati City on Tuesday (April 14). The PSE has broken past the 8,000 level on March 30, and has since then extended its winning streak to finish at an all-time record of 8,127.48 last Friday (April 10), the 27th time the PSEi closed at an all-high since the start of the year. Also in photo is Trade and Industry Secretary Gregory Domingo. (MNS photo)

Manila, Philippines, AFP, Thursday 4/16/2015 – Like the bullet embedded in his neck that may kill him if removed, Philippine President Benigno Aquino believes it is safer that some atrocities of his nation’s previous dictatorship remain buried.

But like the thousands who were tortured, jailed or lost relatives during the reign of Ferdinand Marcos a generation ago, Aquino is still seething.

In a lengthy interview with AFP this week from the presidential palace that was once the domain of his nemesis, Aquino offered rare insights into his struggle to ensure anger did not impact his running of the country.

“I am 55 years old right now. I cannot act like I am a hot-headed 16-year-old,” Aquino said when asked to reflect on the Marcos dictatorship.

The power struggle between the Marcos and Aquino families has created one of Asia’s great political rivalries, with betrayals, murders and family secrets worthy of a Shakespeare plot.

The duelling began with Aquino’s father and namesake leading the democracy movement that sought to end Marcos’s martial law in the 1970s.

Marcos infamously ruled the Southeast Asian nation with the aid of the United States, his theatrical wife, Imelda, and omnipresent security personnel who were willing to abduct, torture and kill for their boss.

But the deadly shooting of the elder democracy-champion Aquino at Manila airport in 1983 as he returned from exile proved to be the dictator’s undoing.

The assassination triggered national outrage that launched the victim’s wife, Corazon, into the leadership of a suddenly powerful opposition.

In 1986, the previously timid housewife led millions onto the streets in what became known as the “People Power” revolution that forced the Marcos family to flee aboard a US military plane to exile in Hawaii.

Corazon Aquino had a tumultuous six years as president, surviving coup attempts by military figures who were once loyal to Marcos, then to her, then only to themselves.

The Philippines endured many more years of political chaos after she stepped down in 1992, as Imelda Marcos and her children returned home and began plotting their return to power.

In 2010, Benigno Aquino was elected president in a landslide victory after pledging to eradicate the corruption that was crippling the country.

Many also hoped Aquino would use the full powers of his office to uncover more of the crimes committed during the dictatorship. Previous administrations, including his mother’s, were unwilling or unable to do so.

Aquino told AFP he had long dreamed of a South African-style truth and reconciliation commission, through which human rights victims could give testimony and perpetrators reveal their crimes with the hope of amnesty.

But he decided against creating such a commission for fear of re-igniting tensions and creating more violence.

As an example, Aquino raised the prospect of a father finally finding out what happened to his son who had been abducted during Marcos’s reign, but then the statute of limitations meaning there could be no prosecution.

“If suddenly we find the people who took him, and they say: ‘We tortured him, we burned him, we pulverised the bones so nobody could find him’, the father can no longer press charges,” Aquino said.

“Would he take the law into his own hands and begin a new cycle of violence?”

Aquino emphasised this did not mean martial law victims should forgive and forget.

He pointed to his championing of landmark legislation introduced in 2013 to ensure thousands of victims who suffered human rights violations under martial law are compensated, even though the payments are expected to be very small.

“It is a small token on behalf of the state. (To say) the state is here to protect you, at one point in time it oppressed you,” he said.

“But, more importantly, it seems like it carves in stone the collective memory (of) people so we do not repeat the mistakes of the past.”

On a personal level, Aquino said he learnt the hard way the importance of not acting on emotions.

He recounted the coup attempts against his mother, when he said he impulsively rushed to help her and was fired on by rebel soldiers.

In one incident, three of his security personnel were killed and he was shot in the neck, where the bullet remains embedded.

“There is a danger if you try to remove it, you will hit a nerve bundle that controls the facial expression. And it’s kind of close to the carotid artery, which if injured is very dangerous,” he said.

“I keep it as a reminder (not to be emotional).”

Showing just such gritted restraint, Aquino declined to offer expansive comments on Marcos’s son and namesake, now a senator and being pushed by his mother to reclaim the nation’s top post.

“I don’t think that will happen,” said Aquino, who is limited by the constitution to one term, when asked whether Marcos could win presidential elections next year.

UPAAGLA August 29 event is all about caring