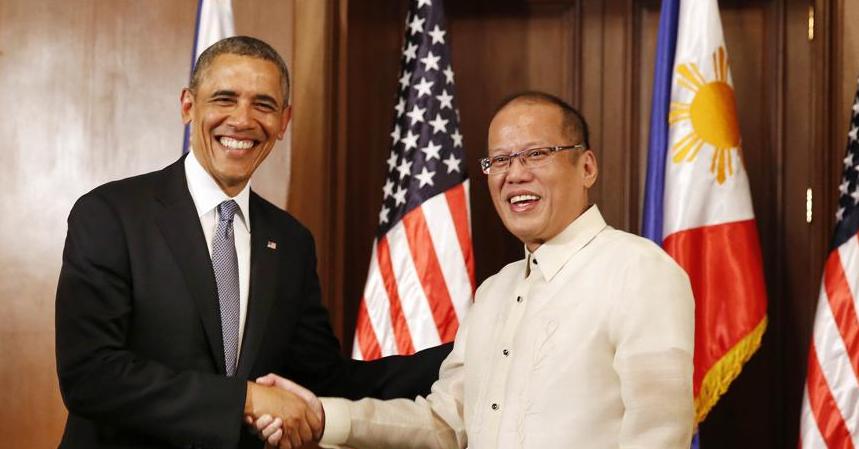 President Barack Obama meets with President Benigno Aquino of the Philippines at the Malacanang Palace in Manila, April

BOSTON, Massachusetts, Sept 23 (Mabuhay) – President Aquino again took a shot at the Marcos dictatorship during a speech at Harvard University, debunking perceptions that life under a dictatorship is better than under a democracy.

Speaking before the John F. Kennedy school of government at Harvard, Aquino again took a swipe at the administration of President Gloria Macapagal Arroyo for allegedly taking a page from the martial law regime of President Marcos.

He said the previous administration supposedly perpetuated the brain drain in the Philippines.

“Starting in 2001, however, my predecessor, instead of learning the lessons of Martial Law, seemingly adopted Mr. Marcos’ handbook of how to abuse the democratic process. At the end of her regime, our people were so apathetic to all the scandals and issues affecting her, and government’s inability to effect change, that the overwhelming ambition of so many was to leave the country. We now have an estimated 10 million of our countrymen, 10 percent of the country’s population, residing and working abroad,” he said.

Aquino enumerated his administration’s accomplishments including reducing waste and corruption, doubling infrastructure spending as well as anti-poverty measures such as conditional cash transfers, the passage of the reproductive health law and solving the backlog of classrooms.

“We have a conditional cash transfer program which provides regular cash grants to 4.1 million poor households, who commit in turn to have regular health check-ups for pregnant mothers, among other conditions such as vaccinating children, and keeping them in school,” he said.

“We have closed critical resource gaps in education such as classrooms, books, and school seats while expanding our basic education to put it at par with international standards.”

The President also touted progress in the process to attain lasting peace in Mindanao.

Not surprisingly, it was at the question-and-answer forum that followed the speech that the President was at his most candid.

He reiterated a vow to pass an anti-dynasty law during his term and shot down perceptions that life under a dictatorship is better than under a democracy.

“A dictatorship can never be a good solution. The person, no matter how good, how well-intentioned, how thoroughly prepared, will have an absence of a check and balance. And again, man is an imperfect being so his good will happen right away and his bad will be exacerbated,” he said.

The President had a clear answer for those who say he has dishonest aides and allies.

“If they think that I have dishonest people around me, then all they have to do is file the appropriate case,” he said.

However, he deftly sidestepped a question on who would be his chosen successor in the 2016 election.

“As to naming who I think will be a good successor, I think I believe we have a lot of material in the country. But if I were to mention them now, I’m sure you can imagine the repercussions back home as a media frenzy,” he said.

The President said he still has about a year and a half to go and elections should not distract his government from its obligations to the Filipino people.

The next leg of the President’s US tour is New York where he is slated to attend the United Nations Summit on Climate Change. (MNS)