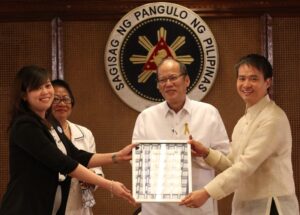 In his speech after leading the bell ringing ceremony at the PSE trading floor, the President said the main index, which posted its all-time high of 8,127.48 points on April 10, 2015, has more than doubled when he had his first bell-ringing ceremony in 2010.

He noted that in his almost five years in office, the PSEi was able to post 119 record-highs.

This performance, he said “stands as a sound reminder of the optimism that continues to surround the Philippines.”

The President noted that trading activity in the local bourse rose by 40 percent year-on-year to Php 641.59 billion as of March against the Php 457.08 billion of the same period in 2015.

He also said that net foreign buying during the same period went up by 182 percent to Php 47.87 billion from year-ago’s Php 17.33 billion.

And with the scheduled migration of the PSE to a new trading system in May 2015, the President said he hopes for better trading capacity and increased risk management ability.

“I have no doubt that this system will serve you well in the future, especially since I expect to ring the bell in celebration of the index breaching the 9,000 and 10,000 levels hopefully before I step down from office,” he said.

The PSE is set to adopt the NASDAQ OMX technology in lieu of NSC V900 of NYSE Technologies, which it started to use in July 25, 2010.

The PSE said it will be using NASDAQ’s X-stream Trading to support its equities and equity traded funds (ETFs) operations.

President Aquino said he has been “bullish on the Philippines long before we regained our prominence in the global economy, long before we achieved investment grade, and long before the all-time highs the PSE index has recorded.”

”The source of my confidence is the Filipino people. Whether here or abroad, whether populating the stock exchange, studying in technical-vocational training centers, or working in offices around the country, the Filipino people have always been our greatest resource,” he said.

And because the citizens are the country’s greatest resource, the President said the government has and continue to prioritize programs on healthcare, social services, and education.

”We want to empower our citizenry to become greater participants in growing the economy,” he said.

Aquino cited that “the kind of success, the kind of governance we are experiencing can be a perpetual reality, and that our people will make that happen.”

”As we celebrate this historic achievement, I invite you to join us in engaging all sectors, towards continuing this momentum – not only the momentum of our stock market, but also and more importantly, of our entire country,” he added. (MNS)

It’s presidency or nothing once Duterte decides