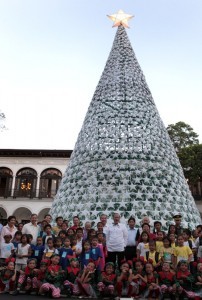 President Benigno S. Aquino III acknowledges the warm reception from the participants of the Pasko ng Batang Pinoy 2012 at the Kalayaan Grounds of the Malaca?n Palace on Wednesday (December 19) by posing with the children beside the Christmas tree at the Kalayaan Ground in Malacanang.. The Pasko ng Batang Pinoy Project is part of the Department of Social Welfare and Development’s comprehensive program which targets zero street children, street families and Badjaos in 10 priority areas in Metro Manila where there are large concentration of street children, families and IPs. (MNS photo)

‘Pasko ng Batang Pinoy’ is an event held annually by DSWD in collaboration with 17 local government units in Metro Manila to provide street children a venue for self-enhancement through various activities to enjoy the spirit of Christmas.

During the event, President Aquino also found himself quite overwhelmed by the innocent questions of children who took the opportunity to convey their concerns with him on various issues, including personal ones.

President Aquino was asked whether he also went Christmas caroling in the neighborhood when he was a kid. The Chief Executive said he was not able to go through that experience during his boyhood because the country was under Martial Law at the time.

The children requested if the President could sing some Christmas tunes for them this time around, but he politely declined, saying he doesn’t have the voice for it. “Baka mas magaling ‘yung boses niyo kaysa sa boses ko,” he said.

Another boy asked President Aquino whether he also played with firecrackers like ‘watusi’ or ‘piccolo’ during his younger years. He said ‘piccolo’ was not yet invented back then but he did play with ‘watusi’ and a harmless firecracker called ‘sparkler.’

The Chief Executive, however, told the children that he and his playmates played with these firecrackers carefully and always under the supervision of an adult to avoid injuring themselves or other people. The government has an ongoing campaign prohibiting the use of firecrackers, especially the most dangerous and illegal ones, to keep the citizens safe during the holidays.

With respect to cybercrime, President Aquino told the boy who is concerned about his fellow children getting addicted to Facebook and other social media platforms that the Supreme Court is still reviewing the Anti-Cybercrime Law.

On politics, President Aquino reiterated that he no longer plans to seek another term come the 2016 presidential elections. He said he would rather have someone who will continue the reforms his administration implemented to succeed him in office.

President Aquino, meanwhile, promised one of the kids who got separated from his parents that the government through the DSWD would make an effort to find them. He also said Secretary Corazon Soliman would be around to assist him in his education.

The children, in turn, thanked President Aquino for his gifts and for spending time with them. A little girl even gave the Chief Executive a warm embrace, saying that was his special gift for him this Christmas, which President Aquino gladly accepted. (MNS)

Of Fil-Ams and identity crisis

FilAm ARTS’ newest initiative, The Saysay Project, to be featured at FPAC