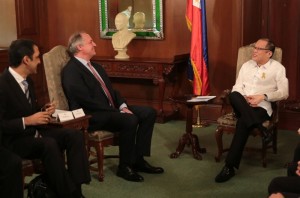 At the resumption of the Senate probe on the bloody Jan. 25 clash between elite PNP-Special Action Force and Moro Islamic Liberation Front combatants, Roxas told the senators: “The President asked some questions in the nature kung ano ba ang nangyayari… PNoy was getting in other reports that are conflicting [with] each other.”

“We did not know that there was such an operation launched. We cannot put into context how many were at risk,” he added.

Espina was also informed about Oplan Exodus after the operation was carried out.

On January 25, the President was in Zamboanga City to check on the security situation there following a car blast that killed two people and injured 52 others.

At the same hearing, resigned PNP chief Director General Alan Purisima informed the President that the PNP-Special Action Force commandos were “supported” by military troops, despite information from Armed Forces top officials that their men could not get inside because the area was marshy.

The January 25 incident resulted to the deaths of the 44 elite police commandos, 18 members of the Moro Islamic Liberation Front and four civilians.

The MILF’s breakaway faction, the Bangsamoro Islamic Freedom Fighters, was also involved in the encounter.

The PNP SAF’s mission was to serve the warrant of arrest to two suspected terrorists – Malaysian Jemaah Islamiyah leader Zulkifli bin Hir also known as Marwan and Filipino bomb maker Basit Usman – who were confirmed to be hiding in the area.