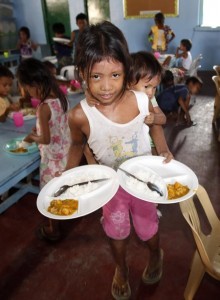 A girl carrying her younger sister on her back collects their free meals during a feeding program at a slum area in Baseco, Tondo city, metro Manila May 22, 2013. (MNS photo)

MANILA, May 23 (Mabuhay) — Malacanang said it remains committed to addressing poverty in the country through various initiatives and it is not solely relying on surveys as benchmarks for its interventions.  In a latest Social Weather Stations (SWS) survey, it showed a rise on the number of hunger incidence in the country, from 16.3 percent in December to 19.2 percent this March.  But in a press conference in Malacanang, Deputy Presidential spokesperson Abigail Valte said the SWS survey, since it is done quarter to quarter, is a little bit volatile or is moving up and down.

One of the continuing thrusts of the government is the expansion of the conditional cash transfer (CCT) program of the government, the Palace official said.  The government said that all over the country there were 3.9 million family beneficiaries of the CCT. The CCT is a human development program that invests in the health and education of poor households, particularly of children aged 0-14 years old.

Other programs also include livelihood for the poor, Valte said. This initiative provides trainings to support for those who wish to start small businesses, small or medium enterprises, she added.   The government has also identified several areas to prioritize to generate more jobs particularly in the agri-business and tourism sectors, she added. (MNS)

Legarda underscores use of modern technology in building resilience