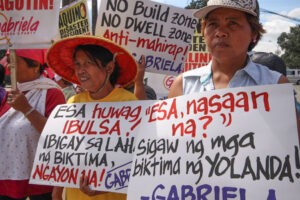 Members of the women’s group GABRIELA hold a protest outside the DSWD headquarters in Quezon City on Friday, to mark the 2nd year commemoration of Typhoon Yolanda. The group pushed for the immediate release of the Emergency Shelter Assistance to help victims with their recovery.(MNS photo)

In a candle-lighting event in Manila on Saturday, youth group Anakbayan protested the Aquino government’s “criminal neglect, corruption, and exploitation of typhoon victims.”

“It has been two years now after Yolanda, but the people are suffering from the bigger disaster that is the Aquino government. Instead of helping the victims, the government pocketed the funds allotted for the victims and paved the way for private contractors and big businesses to profit from the misery of our kababayans,” said Anakbayan national chairperson Vencer Crisostomo.

Citing a report by the Commission on Audit, Anakbayan said at least P382 million local and foreign cash donations were locked in the bank accounts of the Department of Social Welfare and Development, while P932 million were kept idle in the Office of Civil Defense.

“The continuing neglect for the welfare of victims of Yolanda shows the heartlessness of the Aquino ‘tuwid na daan’ (straight path) government,” Crisostomo said, alluding to the administration’s slogan on good governance.

“The failed Yolanda rehabilitation aimed to benefit big business and corrupt bureaucrats is proof of the failure of the Apec-type model of ‘disaster management’ and ‘disaster resiliency.’ Is this what they are set to adopt for the region? To use the disaster victims for their neoliberal agenda is an insult to Filipinos especially the Yolanda victims,” he said.

The Apec Economic Leaders’ Meeting will be held in Manila next week, with leaders of the world’s top economies expected to arrive in the country. One of the topics that will be discussed in the summit is disaster risk reduction and resiliency.

(Victims who had been victimized twice over. As if being denied of help wasn’t enough, the victims have also been used [to serve their agenda].)

The Aquino government has drawn flak for its supposedly slow and inefficient rehabilitation efforts in Yolanda-hit areas. People Surge, and alliance of Yolanda survivors, has lamented the lack of permanent shelters and the presence of “small and cramped” bunkhouses even two years after the disaster.

A United Nations representative also previously called the government’s response as inadequate, saying that the Philippines has not done enough in rebuilding typhoon-hit areas.

Reacting to criticism on slow distribution of cash assistance to Yolanda survivors, DSWD officials said they had already released nearly P995 million of donations that the department received since November. (MNS)

New lines and engine options for the Ford Explorer