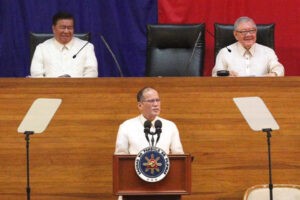 In his final State of the Nation Address (SONA), Aquino said the proposed 2016 budget already has funds for 103.2 million additional textbooks and 4.4 million more armchairs for public schools in the country.

The President also used his valedictory address before Congress members to once again promote the K-to-12 program, which is still facing legal questions before the Supreme Court.

The President said that his administration was able to reduce the number of out-of-school youth from 2.9 million in 2008 to 1.2 million in 2013.

He also boasted of wiping out the backlogs in classrooms and public school teachers as early as 2013. (MNS)

No interest to be president, says Duterte minutes before deadline

How Engineers Are Transforming Lives