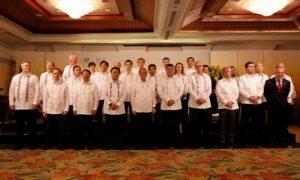 MANILA (Mabuhay) – Count President Benigno Aquino III as among the men who are in awe of Filipino women’s strength and capabilities.

During the Asia Pacific Economic Cooperation’s (APEC’s) Women and the Economy fora in Manila on Thursday, Aquino hailed women leaders in government and economy.

He went as far as saying, “Women, more often than not, are more strong willed and capable than men.”

“Is it any surprise that the common Filipino male never questions the authority of Filipinas,” he added, to the amusement of the predominantly female audience.

“I believe it is intrinsic to our society that we see women as superior in many aspects including prudent budgeting and focusing on the advancement of the family as a whole,” he explained.

Aquino recalled that his mother, the late Corazon Aquino, had showed him “one of the clearest examples of conviction for one’s believe” when she would bring toiletries and extra clothes while campaigning. When he asked her why, the former president said she was just being ready in case she is arrested by agents of strongman Ferdinand Marcos. 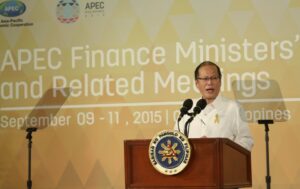 Carpio-Morales, De Lima and Pulido-Tan have been dubbed “Tres Marias” or “Three Furies” of the Aquino administration because of their no-nonsense performance.

“They will not be defined by their gender but rather their integrity, their work ethic and their willingness to serve,” Aquino said of the many women leading various agencies under his administration.

Aquino said women have also been doing well in business, especially since 54 percent of all registered trade names are owned by women, according to the Department of Trade in Industry.

On the other hand, data from the Asian Institute of Management showed that 63 percent of managers and business owners are women, many of them involved in Micro Small and Medium Enterprises (MSMEs), which provide 63.7 percent of the country’s total employment.

The President cited the example of Marife Zamora, chair of business process outsourcing company Convergys Philippines Services Corp., whom he revealed offered to work in government at the start of his term.

“Her company’s performance made me very glad that I declined her offer to move to government,” Aquino said, explaining that the company has surpassed its target to employ 30,000 Filipinos. It has now created 60,000 jobs in the Philippines.

He lauded the Sari-Sari Store Training and Access to Resources (STAR) program, a joint initiative of the Technical Education and Skills Development Authority (Tesda) and Coca-Cola Philippines.

The said program allows women microentrepreneurs to upgrade their skills and resources. This has resulted in the increased income of many beneficiaries.

Aquino said the good performance of the country in the World Economic Forum’s Global Gender Gap Report should not make the Philippine government complacent.

“Women still face a number of pressing issues, and the issue of gender equality calls for continuous reflection and corresponding action” he said.

He assured the Apec fora that “the Philippines will remain [a] partner in expanding opportunities for women.(MNS)