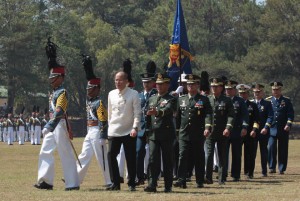 Aquino’s spokesman, Secretary Edwin Lacierda on Monday confirmed that the President signed on Friday a joint resolution approved by Congress raising allowances for police and military officers from P90 to P150.

Personnel from the Bureau of Fire Protection, the Bureau of Jail Management and Penology and the Philippine Coast Guard will also get higher daily subsistence allowance.

The approved joint resolution said the current allowances were “no longer adequate to meet basic needs in view of the prices of basic commodities.”

The amount needed to raise the subsistence allowances will be derived from the savings of relevant government agencies this year and will be appropriated in the national budget in the succeeding years. (MNS)

No butts: Reebok slapped in US on rear-toning claims