Aquino hits critics of CCT: Let me help you count 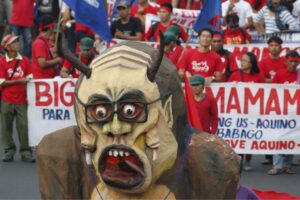 Protesters march with an effigy of President Benigno Aquino towards Batasang Pambansa in Quezon city on Monday, July 27. Aquino will address the joint session of Congress, delivering his last State of the Nation speech this afternoon. (MNS photo)

MANILA (Mabuhay) – THE Pantawid Pamilya Pilipino Program (4Ps) is not a magic tablet, President Benigno Aquino III said on Monday during his last State of the Nation Address (Sona).

Aquino said those looking for the results of the conditional cash transfer program should learn how to count.

(They think it’s like a magic tablet that when a child in kindergarten takes it, he or she instantly becomes a college graduate. Let us help them count. The K-12 is 13 years long while my term is only six years.)

The 4Ps is a social protection program launched in 2008 and expanded under Aquino’s term. It targets poor families and gives as much as P1,400 to beneficiaries in exchange of keeping children in school.

In a video message, one of the beneficiaries of 4Ps, a young girl, defended the program. She said while many people criticized it, they should see how it has changed her life.

Meanwhile, Aquino said his administration nearly doubled the collections of the Bureau of Internal Revenues (BIR) and that of the Government Owned and Controlled Corporations (GOCC).

He said it was the first time that the BIR collection reached one trillion pesos. In 2014, BIR collection was P1.3 trillion, up by 9.64 percent from P1.2 trillion the year before.

He lauded the work of Commissioner Kim Henares who is known for regularly filing cases against alleged tax evaders.

This was similar to the case of GOCCs, which were able to raise dividends turned over to the national government.

A total of P131.28 billion have been remitted by GOCCs under Aquino’s administration (2010-2015) while only P84.18 billion in remittances were collected from 2001 to 2009 under former President Gloria Macapagal-Arroyo. (MNS)