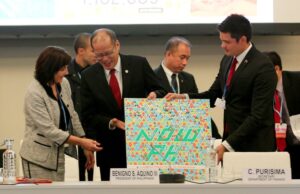 ROME, Italy (Mabuhay) – President Aquino said he hopes that the 21st Conference of the Parties (COP 21) that he attended in Paris will yield enforceable commitments from countries to address climate change.

The President, who attended the Paris climate conference on November 30, said the good thing about the debate on climate issue is that countries now start to recognize that climate change is real.

Super Typhoon Haiyan, or Yolanda, which hit the Philippines in 2013, painted a very grim picture of exactly what climate change is all about, he said.

“Not too long ago, if everybody recalls, there was even a debate as to whether or not there was climate change. Here, I think there was nobody that I heard who was denying that climate change is a problem,” the President said in an interview with the Philippine media here on Friday.

“It was really just a question of whether the two-degree goal or the 1.5-degree goal is the central topic. So the negotiations are still ongoing.”

“We hope that there will be very, very substantial results differentiated from the 2009 Copenhagen efforts,” he added.

It is widely viewed, based on recent science, that a 2 degree rise in global temperatures will have disastrous impacts on the global weather system, the environment and societies.

There are also assumptions that even a 1 degree rise is now expected to be as great as those previously assumed for a 2 degree Celsius warming.

Another good thing is that Germany and France, which are both industrialized countries, have added their voice to the 1.5 degree Celsius above industrial levels, calling for higher emission cuts especially for major polluters.

The Climate Vulnerable Forum, a group of vulnerable countries, has become a major force in calling for the world to take action.

The President said that before they left from Manila, the conference came up with a statement, espousing 1.5 degrees, and this was later ratified in Paris.

“It started out as a group of small, Pacific island nations, numbering about 10 or 11. When we joined in, it reached 20. Before we left for Paris, it had become a group of 43,” he said.

There is a clamor from vulnerable countries for the industrialized nations to shoulder the burden of building the resiliency of those affected as well as facilitating the transfer of technology to address climate issues and cut emissions, the President said.

“So one is hopeful that in the negotiations we really will have something more of substance,” he said.

COP 21, which is considered make or break conference, runs from November 30 to December 11. Countries attending the conference in Paris are expected to come with a binding climate agreement to prevent irreversible damage to the planet’s weather system. (MNS)

DFA to intensify efforts to repatriate Pinoys in Beirut — Palace