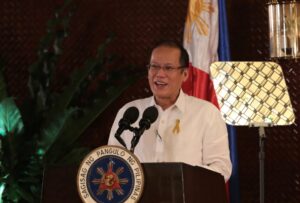 President Benigno S. Aquino III delivers his speech during the Ten Accomplished Youth Organizations Year 12 (TAYO 12) awarding ceremonies at the Heroes Hall of the Malacañan Palace on Tuesday (February 24). Since 2002, TAYO Awards recognizes and supports the outstanding contributions of youth organizations to the country. (MNS photo)

Congress suspended deliberations on the proposed Bangsamoro Basic Law after the misencounter in Mamasapano but Aquino meeting with House leaders on Monday supposedly placed the passage of the bill back on track at least as far as the House of Representatives is concerned.

Communications Secretary Herminio Coloma Jr. the chairman of the House ad hoc committee on the BBL, Cagayan de Oro Rep. Rufus Rodriguez, said the draft could be tackled in the plenary by May 4.

Manila Archbishop Luis Antonio Tagle also called on Filipinos to shun war and take the path to peace on Wednesday during the commemoration of the 29th EDSA People Power Anniversary.

“The path of peace is to find a neighbor, a brother and a sister. When I don’t see anyone as an enemy, I don’t have to fight,” Tagle said during a Holy Mass to mark the EDSA People Power Anniversary.

The EDSA People Power commemoration came a month after the Mamasapano incident.

The Roman Catholic Church official said the People Power Revolution showed the world the “Filipino’s deep capacity to see a brother, a sister in an enemy.”

Aquino and Cabinet officials were present during the Holy Mass.  (MNS)