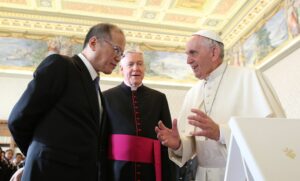 (VATICAN) President Benigno S. Aquino III and His Holiness Pope Francis view the gifts at the Sala dei Papi of the Apostolic Palace during the private audience on Friday (December 04, 2015). (MNS photo)

MANILA (Mabuhay) – President Benigno Aquino III has invited Pope Francis to return to the Philippines during his state visit in Rome, Italy.

“Doon sa Secretary of State ko yata nabanggit. So, sabi ko, my countrymen have instructed me to extend the invitation to the Holy Father anytime that he’d want,” the President said, speaking with Filipino journalists in Italy on Friday.

Aquino said that Pope Francis could not immediately confirm that he will return to the Philippines. 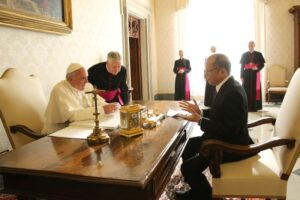 (VATICAN) President Benigno S. Aquino III and His Holiness Pope Francis exchanges views during the private audience at the Papal Library of the Apostolic Palace on Friday (December 04). (MNS photo)

quino said that he told the Pope how special was his visit in the country early this year and the anticipation of his return “”seemed like the church was revitalized and continues to be revitalized.”

“In fact, sabi ko, up to now the tarpaulins and posters, et cetera, that were there for your visit a lot of them appear to be in very pristine condition. They were being kept by our countrymen and displayed. They will probably be handed out to the next generation,” he added.

During their meeting, Pope Francis gave Aquino a coin-shaped bronze sculpture with an olive branch. 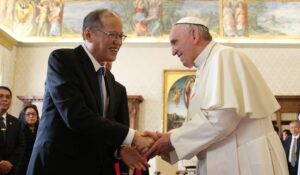 (VATICAN) President Benigno S. Aquino III is welcomed by His Holiness Pope Francis at the Sala del Trono of the Apostolic Palace for the private audience on Friday (December 04). (MNS photo)

“Yung coin is broken in the middle but the roots cross each other. So the idea of being siguro conciliatory, consensus builder, is what is being emphasized by this particular sculpture,” Aquino said, describing the gift from the Pope.

During the meeting, Aquino said that Pope also asked him to “pray for me.”

“Sabi ko sa kanya ‘Holy Father, I think in the Philippines even those who are not Catholics pray for you and I want to assure you that that continually happens,’” he said.

His dealings led to both leaders pledging support to the Agrarian Community Development Support Program, which would help 53,000 families in Mindanao. (MNS)