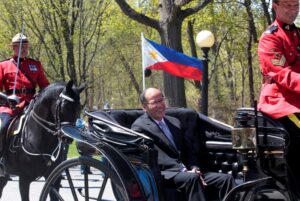 (OTTAWA, Canada) President Benigno S. Aquino III aboard a state landau arrives at the 7 Rideau Gate for the welcome ceremony during his State Visit to Canada.(MNS photo)

MANILA, May 9 (Mabuhay) – President Benigno Aquino III on Friday expressed grief over the death of Philippine Ambassador to Pakistan Domingo Lucenario Jr. in a helicopter crash.

In a statement, Presidential Communications Operations Office head Herminio Coloma Jr. said Aquino and his delegation learned of the tragedy while in Ottawa, Canada.

“He (Aquino) said that the Philippines lost an outstanding career diplomat who served his country with distinction for nearly three decades,” Coloma said.

Aquino is on a three-day state visit to Canada.

Lucenario was among the seven people killed in a military helicopter crash on Friday in northern Pakistan. The victims were on their way to inspect development projects there.

Also killed were ambassador of Norway and the wives of the Malaysian, Indonesian ambassadors and the pilots and crew of the chopper.

Pakistan Prime Minister Nawaz Sharif was traveling to the mountainous northern region of Gilgit on a separate aircraft to launch two projects when the accident happened. He returned to Islamabad, his office said.

Military spokesman Asim Bajwa said in Twitter posts that initial information indicated the cause was a technical fault.(MNS)

Hungry for more this Lenten season?