Aquino must give an account on deadly Mamasapano ops – militant group 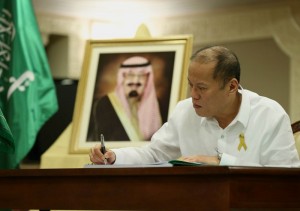 President Benigno S. Aquino III signs the book of condolences for the late King Abdullah bin Abdulaziz Al-Saud at the Embassy of the Kingdom of Saudi Arabia in Makati City on Tuesday (January 27). (MNS photo)

MANILA (Mabuhay) – A militant group on Wednesday said President Benigno Aquino III “has a lot of explaining to do” about the operations in Mamasapano town in Maguindanao, where 44 elite police officers were killed Sunday.

In a statement, Bagong Alyansang Makabayan (Bayan) said the President should tell the people whether he approved the operation, where members of the PNP-Special Action Force was supposed to serve an arrest warrant on Jemaah Islamiyah leader Zulkifli bin Hir.

Police had confirmed the presence in the area of the “high-value” JI leader, also known as Commander Marwan.

“It is hard to believe that 392 elite PNP SAF were being mobilized for an operation against a so-called high-value target and yet our top officials claim they were not aware,” Bayan secretary-general Renato Reyes Jr. said.

The group raised the question after a Manila Standard Today report citing a police general, who was supposedly part of the planning of the operation, as saying Aquino “was aware” of the operations.

It added that the operation was undertaken upon the direction of the United States government that “even offered a $5-million bounty for Marwan’s capture.”

“Aquino has a lot of explaining to do. If he knew of and approved the Mamasapano operation, upon the directive of the United States, then he is also accountable,” Reyes said, adding there are “strong indications” about it.

The President is expected to deliver a nationwide address on the matter on Wednesday night.

Bayan also said the operation against Marwan last Sunday was not the first police action where the US was involved. In 2012, a drone strike hit a supposed hideout of Marwan, who was reportedly killed then.

It also said some US forces have been based in the 6th Infantry Division’s headquarters in Maguindanao prior to Sunday’s clash.

American forces were later seen helping in the extraction of the slain officers’ bodies from the clash site, Bayan added.

LGUs should allow entry of returning residents amid COVID-19 — Palace