Aquino: No kid glove treatment for US Marine 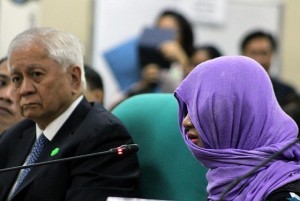 ‘Barbie,’ the primary witness in the case of slain Filipino transgender woman Jeffrey ‘Jennifer’ Laude, testifies before a Senate inquiry on Wednesday, October 22. A US serviceman has been tagged as suspect in the October 11 killing of Laude, an incident that sparked renewed calls for the termination of the PHL-US Visiting Forces Agreement. Also in photo is Foreign Affairs Secretary Albert del Rosario. (MNS photo)

MANILA (Mabuhay) – President Benigno Aquino III on Wednesday said that US Marine Private First Class Joseph Scott Pemberton, the suspect in the killing of Filipina transgender Jeffrey “Jennifer” Laude, is not be treated with kid gloves.

At a forum, Aquino described Pemberton’s transfer to the Philippine military headquarters earlier in the day as a “healthy development.”

“He [Pemberton] is being made available for the investigative and eventually, the judicial processes,” the President said.

Aquino however did not answer a question on Pemberton’s custody, saying the matter will be addressed if the suspect is formally charged and ordered arrested.

Philippine government officials however had earlier expressed intention to fight for Pemberton’s custody once he is formally accused of murder.

In the same forum, Aquino said that the “tragedy” of Laude’s killing “will be settled, in the sense that the guilty will be made to answer for the crime.” (MNS)