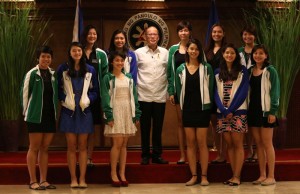 MANILA (Mabuhay) – After the Jan. 25 Mamasapano clash, President Benigno Aquino III is no longer the most trusted top government official, his ratings having dropped to a record low last week, according to Pulse Asia survey results released Thursday.

Senate President Franklin Drilon replaced Aquino at the top of the list, having garnered the highest trust ratings among the top 5 government officials: 44 percent of respondents giving them his nod.

As earlier reported by Pulse Asia, Aquino’s trust ratings nosedived to 36 percent this month from 56 percent last November. He was the most trusted top official four months ago.

The survey was conducted over a month after the botched January 25 Mamasapano operation in Maguindanao, which left over 60 people dead, including 44 police commandos.

It was conducted March 1 to 7 using face-to-face interviews with 1,200 respondents. The survey has a ±3 percent error margin at the 95-percent confidence level.

DUTERTE UNBOTHERED BY RUMORS ABOUT TROOPS’ WITHDRAWAL OF SUPPORT