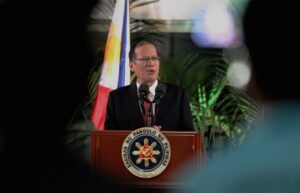 President Benigno S. Aquino III delivers his arrival statement at the Ninoy Aquino International Airport (NAIA) Terminal 2 in Pasay City on Monday (May 11, 2015) from his successful Working Visit to the United States of America and State Visit to Canada

MANILA (Mabuhay) — President Benigno Aquino III on Monday said the Philippines will defy China’s claim on the airspace over disputed territories in the South China Sea.

“We will still fly to routes that we fly based on international law,” Aquino told reporters in an interview in Marikina City, where he inspected classrooms a week before the opening of classes.

The President also said that he is not yet concerned about the possibility of China targeting Philippine aircraft, since Beijing has not yet formally declared an air control zone over the South China Sea.

The President further said that it will be bad for China’s reputation in the international community if it will be engaged in a direct confrontation with the Philippines.

“Klarong-klaro ‘yung disparity sa available military force between China and ourselves. Will they not take that into consideration, especially if you want to maintain a positive image to the rest of the world?” he said.

Last week, the Chinese Navy was reported to have shooed away an American military surveillance aircraft flying over areas being reclaimed by China in the disputed South China Sea.

Earlier this month, a Philippine military official also revealed that Air Force planes conducting patrol over disputed territories were told over the radio in six separate incidents that they were flying on a Chinese “military security area.”

Despite the incident, the US officials said they will continue to conduct air and sea patrols in international waters, including those being claimed by China. (MNS)

Enrile back at PNP General Hospital

NDRRMC apologizes for no text blast during Ruby