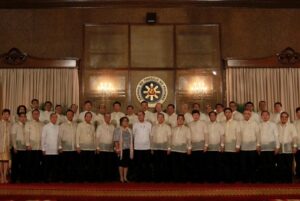 President Benigno S. Aquino III huddles with the Federation of Filipino-Chinese Chamber of Commerce and Industry, Inc. officers, led by its president Angel Ngu, for a snap shot during the oath taking ceremony at the Rizal Hall of the Malacañan Palace on Tuesday (June 23). Also in photo is Justice Secretary Leila de Lima. (MNS photo)

MANILA (Mabuhay) – President Benigno Aquino III was all praises for the Department of Public Works and Highways (DPWH) during its anniversary on Monday, even calling it a model agency.

He also pointed out how corrupt practices in the DPWH were minimized during his almost five-year-old presidency.

The President also pledged to increase the DPWH budget next year, which will be equivalent to 5 percent of the country’s gross domestic product.

During the event, DPWH Secretary Rogelio Singson reported to Aquino that the agency’s quality management system is now certified in accordance with the requirements of the International Organization for Standardization (ISO) 9001:2008 standards.

“This, to us, is a major step towards institutionalizing good governance reforms in the department,” he added.

Singson further said that the DPWH will strive to have all its regional offices and at least one district for region certified by the ISO. (MNS)