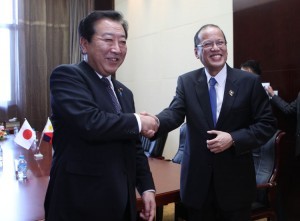 VIENTIANE, Lao PDR – President Benigno S. Aquino III greets Japanese Prime Minister Yoshihiko Noda during the bilateral meeting at the Dok Chik Room of the National Convention Centre at the sidelines of the 9th Asia-Europe Meeting (ASEM9) on Monday (November 05). Japan continues to be the Philippines’ top source of official development assistance (ODS). Japan’s assistance, through loans, grants and technical cooperation covers a wide range of areas, including public works, socio-economic infrastructure, transportation and communications, agriculture and capability-building among many others. (MNS photo)

Aside from the peace deal with the Muslim separatists, the ASEM member-countries expressed their admiration for the Philippines, particularly in its reform initiatives, saying they want to take part in the transformation of the country, he added.

In his meeting with Japanese Prime Minister Yoshihiko Noda, the President said the discussion centered on the clear rules in the West Philippine Sea as well as the peace in Mindanao.

Japan, along with the UK, Turkey and Saudi Arabia, comprises the International Contact Group (ICG), established in December 2009 to pursue lasting peace in Mindanao.

Aside from Japan’s participation in the Mindanao peace effort, it is also a major partner of the Philippines in defense cooperation and anti-poverty campaign, he said.