Aquino: SC ruling on Enrile bail not grounded on laws 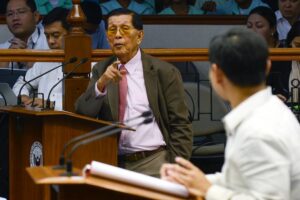 — Senate Minority Leader Juan Ponce Enrile questions Sen. Sonny Angara during a session on tax issues at the Senate on Tuesday. Enrile returned to work Monday, after posting P1.45-million bail for plunder and graft charges filed against him. (MNS photo)

In a media briefing here, Aquino pointed out that the high court’s decision did not consider the evidence presented against Enrile, who is facing plunder and graft cases in connection with the alleged pork barrel scam.

Aquino further pointed out that only the President can pardon prisoners.

9 ‘harmless’ habits that age you

Sweeten the Kitty: Tips for Easier Traveling with Pets