Aquino should let himself be impeached – Valdez 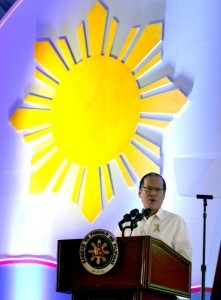 President Benigno S. Aquino III while delivering his speech during the Federation of Filipino-Chinese Chambers of Commerce and Industry, Inc. (FFCCCII) joint celebration of the 116th Philippine Independence Day & 13th Filipino-Chinese Friendship Day at the Tent City of The Manila Hotel in Rizal Park, Manila City on Tuesday (June 10).

MANILA, July 7 (Mabuhay) – Former dean of the University of the East College of Law, Amado Valdez, said President Aquino should allow himself to be impeached for the illegal disbursement acceleration program (DAP) to show there is accountability in his government.

Valdez said the President is just as liable as Budget Secretary Butch Abad who is believed to have proposed the program since Aquino himself approved it.

Valdez referred to Section 3 of the Anti-Graft Law, which states persuading another public officer to perform an unconstitutional act or allowing himself to be persuaded is unlawful.

“Impeachment does not necessarily mean conviction. To impeach is to indict him. If only for purposes of creating a precedent as far as creating accountability, he should allow himself to be open to this and defend himself before the Senate,” he said.

“We are seeing a lot of violations of the Constitution. There is another law that will be presented to Congress. We really have to put our foot down. Congress has to put on record that they are aware. It is their Appropriations Act that was violated,” she said.

She said there are solid grounds to demand that Abad be held administratively liable over the DAP.

She said she heard Abad admit at Supreme Court hearings that it was a mistake to use DAP funds for projects that did not have appropriations.

A separate opinion of Justice Arturo Brion also said Abad, a lawyer and a former congressman who headed the House of Representatives appropriations committee, seems to be aware that DAP was illegal and yet proceeded with its implementation.

“The excuse of the executive is the claim that DAP contributed to GDP…We traced that study and it is very clear that the GDP rose because of totality of expenditures private and public that year. DAP is only part of it. It’s the bigger sum of government expenditures. It was taken out of context,” she said. (MNS)