Aquino, sisters visit graves of parents on All Saints’ Day 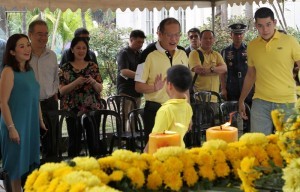 MANILA, Oct 30 (Mabuhay) – President Benigno S. Aquino III and his four sisters visited the graves of their parents on Wednesday, two days before the traditional All Saints’ Day commemoration on November 1.

His sisters Ballsy, Pinky and Viel were accompanied by their respective spouses. Celebrity and TV host Kris, meanwhile, arrived last together with her two sons, Joshua and Bimby who were both wearing yellow shirts. Joshua, who is known to be close to the President, immediately approached his uncle and sat beside him.

The mass was officiated by Monsignor Daniel Tansip, the PSG Chaplain and Father Larry Tolentino of the Diocese of Parramatta Sydney, Australia.

In his homily, Father Tolentino reflected that Filipinos should emulate the lives of Ninoy and Cory who “created and at the same time built a niche in the annals of Philippine history.”

“The Lord Jesus is once again inviting us to be able to present ourselves the call to holiness of which we ourselves, I believe, these two important people in this country have exemplified, if not all, perhaps 95 percent of those as what is mentioned in the beatitudes were given to us, expressed to us not only to their own families but to the society, to the Filipinos as well, as a whole,” he said.

He extolled how the late Senator sacrificed his own life to attain democracy and how the late first Filipino woman President played a significant role in bringing hope and in awakening the lives of the Filipino people.

The President and his sisters, assisted by the officiating priests, blessed the tomb of their parents after the mass.

President Aquino stayed for a while and had a brief chat with his sisters, with Kris in one moment apparently showing him the new commercial of her youngest son Bimby.

The mausoleum of the late democracy icons was decorated with yellow flowers such as stargazer, Malaysian mums, carnations, chrysanthemums and orchids. It was closed to public viewing to give time for the Aquino family to hold a private mass.

Before they left, the Aquinos went to a nearby mausoleum where their uncle and aunt were buried and offered a short prayer. (MNS)

Napoles denies scam even when confronted with own signature