Aquino tells APEC CEOs: “There is no better time to invest in the Philippines than now” 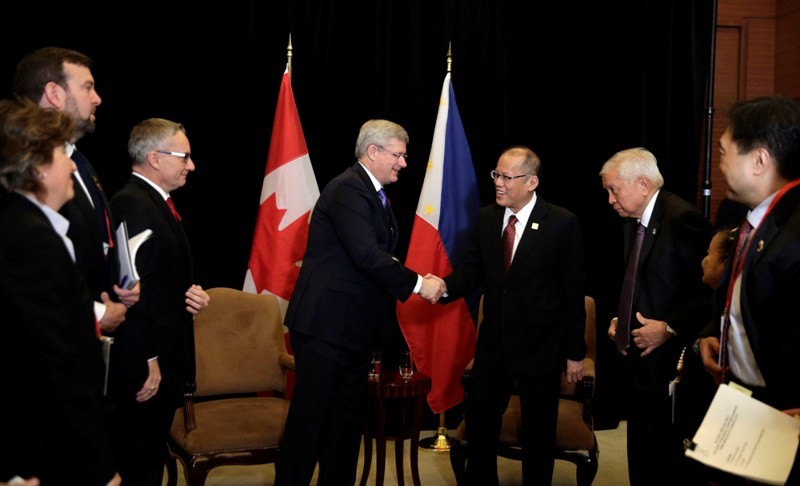 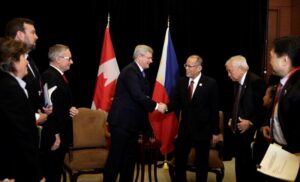 BEIJING, P.R.O.C. – President Benigno S. Aquino III greets Canadian Prime Minister Stephen Harper during a Bilateral Meeting at the Birch Room of the St. Regis Hotel in Beijing, People’s Republic of China on Monday (November 10, 2014), at the sidelines of the 22nd Asia-Pacific Economic Cooperation (APEC) Leaders’ Meeting (AELM). At the core of Philippine-Canada relations is the human dimension – the presence of more than 682,000 Filipinos in Canada. They are among Canada’s most active citizens, contributing to the economic, social and cultural dynamism of the country. Of the total US$ 17 billion remittances from overseas Filipinos in 2010, 10% or about US$1.7 billion came from Canada. Filipinos now comprise the 3rd largest immigrant community in Canada. (MNS Photo)

BEIJING, China (Mabuhay) – President Benigno S. Aquino III encouraged various potential investors on Sunday to do business in the country, underscoring that “there is no better time to invest in the Philippines than now,” given its steady economic growth.

In his speech at the 2014 Asia Pacific Economic Cooperation (APEC) Chief Executive Officers (CEO) Summit, President Aquino relayed how his administration was able to bring about economic reforms in the Philippines over the last few years, thus making it more viable for investments.

President Aquino cited the steady growth of the country’s gross domestic product (GDP) over the last four years, averaging at 6.3 percent, as compared to 4.3 percent from 2006 to 2009 during the previous administration.

He said this development is even more impressive, considering that this growth has been attributed to increasing investments and trade, besides the remittances sent by overseas Filipino workers to their families back home.

“This is an indicator of a more balanced and more resilient economy – one that can better withstand shocks and one that is consequently more attractive to investors,” President Aquino said.

President Aquino also mentioned that quality of employment has been improving as well, which means that more Filipinos are earning increasingly stable incomes and are thus able to better plan for the future.

On top of this, the Philippines received 20 positive credit ratings actions from agencies around the world, including investment grade statuses from three of the most renowned firms like Moody’s, Standard & Poor’s, and Fitch. Also, the World Economic Forum named the Philippines as the ‘most improved’ country since 2010 in its recent competitiveness report.

“Indeed, over the course of our administration we have proven ‘good governance is good economics.’ We assure all of you: our efforts will not stop here. We are looking to go from strength to strength. One way we are doing this is by making investments in our greatest resource, the Filipino people, because we know that it is through empowering them that we can sustain our country’s momentum,” President Aquino said.

President Aquino noted the increases in the budgets of the Department of Education and the Technical Education and Skills Development Authority by 75 and 77 percent respectively as proof of his administration’s commitment to investing on the people.

“Moving forward, we are looking to redouble our efforts in these fields. Our country will be hitting a demographic sweet spot by 2015 as majority of our population reaches working age. We want to make certain that they can continue capitalizing on the job openings that are being created,” he said.

President Aquino added that the annual infrastructure allocation more than doubled over the past three years under his watch from P200.3-billion in 2011 to P404.3-billion in 2014. He said the intention is for it to reach at least five percent of the country’s GDP by 2016.

“These are just a few examples of our continued efforts to keep the dynamo of progress engaged in full throttle, and it is clear, there is no better time to invest in the Philippines than now. We encourage all those in attendance today to take a closer look at the Philippines or, if you had previously been intrigued by our country, to transform your interest into something more concrete,” he said.

President Aquino said his government will do everything in its power to ensure that the Philippines will remain competitive for many years to come, expressing his eagerness to work with all the CEOs present, who can eventually invest in the country and become part of what he referred to as the “great Philippine turnaround.”

“Perhaps, just to emphasize, we believe the wherewithal and the base for all the things that we have been trying to do – the reforms in our country – emanates from the mandate given by our people. So our focus is also on ensuring that all of our people get the maximum opportunities for them to be able to participate in the growth of the country. The growth has to be inclusive for all,” President Aquino concluded in his speech. (MNS)