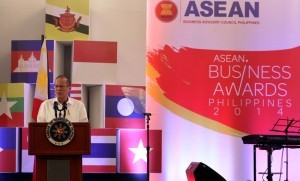 MANILA (Mabuhay) — President Benigno S. Aquino III will address a United Nations climate summit, speak to American businessmen, and meet with the Filipino community when he visits the United States from September 20 to 24.

“As in all of the President’s trips abroad, the primary objectives of the visit will be to continue to project the Philippines as an emerging economy and investment destination in Asia; to promote the country as having an economy with sound credentials built on the back of good governance principles; and to highlight the country’s role as an archipelagic and maritime nation with key advocacies in maritime security, maritime safety, promotion and growth of the blue economy and sustainable development,” Foreign Affairs Assistant Secretary Maria Andrelita Austria said during a press briefing in Malacañang on Tuesday.

The President will arrive in Boston, Massachusetts on the evening of September 20 from Berlin.

Having spent many years in Boston, he will visit old friends, Austria said, adding that he will be honored at Boston College on September 21, and while there, he will meet with some scholars of the Benigno and Corazon Aquino Scholarship Foundation.

He will then attend a reception with members of the Filipino-American community in the New York-Boston area.

On September 22, the President will meet with Representative Joseph Kennedy III (4th District, Massachusetts), who visited the Philippines recently and invited the President for a meeting when he visits Boston.

Later in the afternoon, the President will receive three big American companies, and this will be followed by an interview with the National Public Radio station, according to Austria.

He will then deliver a policy speech at the Kennedy School of Government at Harvard University and then proceed to New York.

While in New York, the President will have a series of media interviews with major print and television companies, Austria said.

After that, the President will join other world leaders for the UN Climate Change Summit at the UN Headquarters.

After this, he will have a business roundtable with the US Chamber of Commerce, the US-ASEAN Business Council, and the US-Philippines Society.

Later in the afternoon, the President will speak at the World Leaders Forum of Columbia University, and have a coffee meeting with the media.

On September 24, the President will depart New York for San Francisco.

“This was supposedly only a technical stop but we have had requests from big business companies to meet with the President. So we have arranged for at least two business meetings in San Francisco,” Austria said.

He then leaves for Manila and arrive on the evening of Thursday, September 25.

The President is currently on a four-nation tour of Europe, visiting Spain and Belgium. He will then proceed to France and Germany, his last stop in Europe. (MNS)